Woodturning demonstrated at the fair 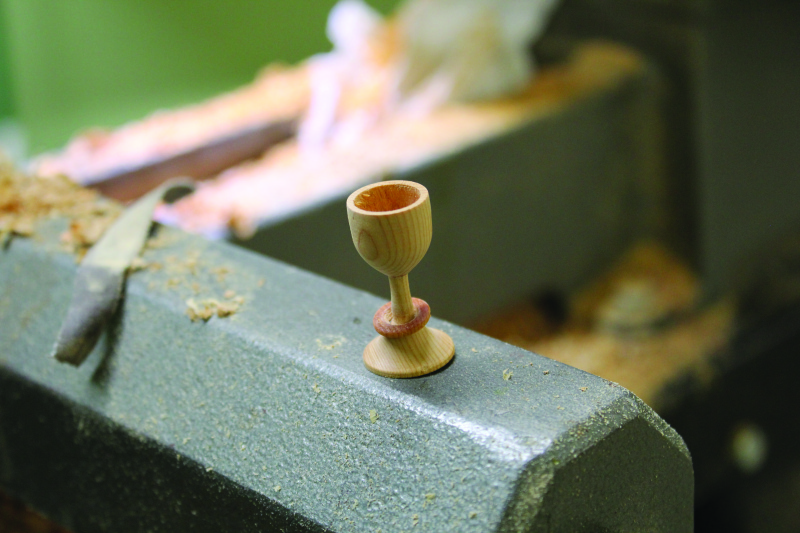 Wood carver - John Hampton, was out at the Pacific County Fair and was providing visitors a live demonstration in "woodturning".

With an origin dating back to the ancient Egyptians, the tool of choice, a lathe, was first developed as a two-man operation. One would turn a piece of wood with a rope while the other applied tools to create shapes in the piece.

As the process and tools developed, so did the move from daily use items like bowls and cups to art like knick-knacks and cowboy hats. And many would say that the creations from Hampton, is more then mere woodturning.

During one of his demonstrations at the Pacific County Fair, Hampton pulled from a small stash of pre-sized blanks, placed it on his modern "electric" lathe and started devouring the first few layers of his lumber.

Working on a rather small piece, approximately a two-inch by two-inch piece of pine, Hampton was focused in his work and willing for people to have a close up look.

"I am not sure what we will make here, but lets see what comes out of it," said Hampton. As with most any artists who let the feel of the wood or the feeling in the air help give them direction, Hampton laid his wood chisel along side the spinning chunk of wood and let the sawdust fly.

Hampton was quickly into a shape and at first the observers really have no clue, but with a twsit and a turn, Hampton had moved to the end of the piece, cored out a hole and the shape of a goblet started to form. Now albeit a very small goblet. When queried what use people would have of such a small wine glass Hampton explains.

"I have had many request for small items like vases, or goblets for dollhouses or just as a display piece."

On this specific mini-goblet that Hampton was creating, he put a small twist on it by working in a ring, which moves, riding along the stem of the glass.

Hampton finishes with the shape of the base, making sure that it was not to thick as to take away from the final look of the goblet, gave it a quick poke and voila, the finished product.

Hampton has spent his life living and working on the coast of Washington, now residing in Raymond. His initial inspiration for the creation of the woodturned cowboy hat came from one of his visits through Wyoming. And has been hooked on the art ever since. Hampton uses only salvaged wood in his works creating bowls, boxes, candlesticks and hollow vessels.

You can see more of Hamptons works online at Hamptonwoodcraft.com.