Winter a great time to improve your home defense skills 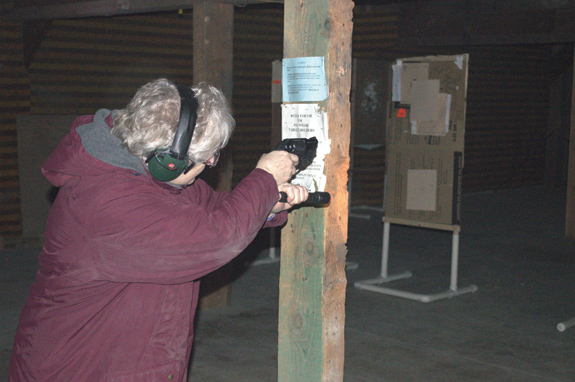 Student Mary Farrell, of Rochester, practices shooting from around a corner in the dark during a Person Protection in the Home course at the Centralia Rifle Club Dec. 15. Students were afforded such unusual shooting opportunities on the range under the supervision of an NRA-certified instructor, and would not have been able to do so otherwise.

The holidays can be a dangerous time for home invasions. Between families on vacation, increased nighttime hours and presents filling many living rooms, the chance of an attempted burglary in some homes can increase by as much as 20 percent this time of year.

While precautions such as remembering to lock your doors and windows, keeping valuables out of plain sight and properly lighting the exterior of your home can all help in preventing home invasions, some criminals remain bold and intent on violating your personal space and your person.

In this regard, it does not hurt to be ready to defend yourself. In some cases, the proper application of force might even save you and your family's lives.

The best place to start is with a certified firearms instructor versed specifically in home defense. This reporter was able to connect with Steve Carmick, NRA instructor with the Centralia Rifle Club, and attended a Personal Protection in the Home course the weekend of Dec. 14.

Carmick, a former police officer and Air Force veteran, said those who buy firearms for personal protection should regard them somewhat like fire extinguishers, in that you don't buy a gun because you want to shoot someone any more than you buy an extinguisher because you want your house to catch on fire.

"If you need it, nothing else will fill that need," he said of firearms, stating he has never himself had to fire on another human being, and advised students they should avoid such conflicts however they can.

While Washington residents have no legal obligation to retreat if threatened with violence, NRA curriculum specifically states fleeing from an attacker or allowing them to escape is always preferable to the use of force.

A defense-minded resident should instead plan ahead, according to the curriculum, and prepare a safe room to retreat to in the even of an invasion, as well as identify proper cover within your house when a safe room is not an option.

Students were also told to never attempt confronting a suspect or pursuing them if they run away, with Carmick stating it is preferable to contact law enforcement and let them pursue the individual rather than needlessly risk your life.

If an armed conflict is unavoidable, such as an invasion of your safe room or an abrupt encounter with an assailant, the proper application of deadly force will depend both on regular training as well as the function of your firearm itself.

The NRA advises a home defense weapon should be the largest caliber a user can safely handle, and recommends nothing smaller than 9mm, though Carmick advised he personally feels .40 caliber should be the minimum.

If larger calibers seem intimidating to users, due to a strong recoil or loud noises, Carmick said a resident firing a gun in defense of their home will be under great physiological stressor's and will not notice recoil, noises, muzzle flash and the like, and should not factor these into the selection of a home defense weapon.

At the end of the course, students were able to fire an assortment of pistols to get a feel for different styles. Some found their favored gun early on and others had to experiment with calibers and frames. Carmick said selecting styles and makes are oftentimes "Chevy versus Ford" arguments, and said many decisions regarding gun selection really come down to preference rather than any practical reasons.

While on the range, students practiced shooting from around corners, from behind cover, and in the dark, to simulate certain conditions one may encounter in the home during an invasion. Carmick advised normal range users would never be able to do such things if not under the direct supervision of an instructor like himself or co-instructor Daniel Steffen.

Both emphasized safe gun handling on the range, in the home and at all times, stating an individual will use what they have practiced in the heat of a conflict and must always treat a gun like it is loaded and ready to go off.

"All you need is someone to become careless," said Steffen, "and a gun will do what it is designed to do."

Such personal defense courses, offered for both inside and outside the home, are scheduled regularly at the Centralia Rifle Club (908 Johnson Rd., Centralia) and those interested learning more about these NRA-certified courses can go to www.crcjd.org.

The content of this article pales significantly in comparison to the volume of information shared at these courses, and it is highly-recommended one should attend if you want to be fully immersed in the basics of home protection.