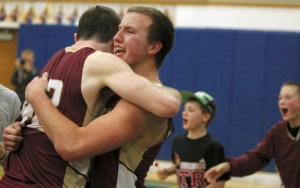 The Winlock boys continue to amaze both those who see them play and those that simply read the sports page.

The Cardinals grabbed two more wins, but now they are important and shocking. On Thursday, Mike Blum, Caleb Rose and Enrique Hernandez hit clutch free-throws to put away the number three seed Wahkiakum Mules 57-52. Two nights later, Hernandez busted out for 28 points despite having a difficult time staying in the game with a sore knee in the second quarter and missing several minutes.

On Thursday, Blum went eight for ten from the free throw line and Hernandez included 24 points as the Cardinals survived a forgettable first quarter where the they fell behind 13-7 behind poor shooting. Hernandez led the team in rebounding, but Chance Fisher and Cory McNelly each grabbed seven bounds as Winlock out-rebounded the Mules 35-22.

Ahead just 52-50, Wahkiakum's Peter Weiler put in a lay-up. The Mules fouled Skylar Tremayne who put in one of two free-throws to bring the score to 53-50 with 39.4 seconds left.

Next came 24 seconds of defense and the Mules were denied as Blum came up with his fifth rebound. Rose and Hernandez were both fouled and hit four consecutive free throws to finish the game.

46 hours later, the Cardinals jumped it up with the second-place team from the Pacific League, Willapa Valley. Behind 28 points from Hernandez and 18 rebounds from Fisher, the Cards qualified for a semi-final mach and a spot in the WIAA State regional Tournament with a 58-51 victory over the Vikings.

The Cards may have outscored the Vikings, but it was defense that claimed the win according to Head Coach Dennis Tauscher.

“They are playing better defense and learning the press a lot better,” said Tauscher. “Their knowledge of the press has really made a big difference."

The sound in the gym trickled to a whisper when Hernandez took a fall in the second quarter, and left the game for about three minutes. His absence certainly affected the Cardinal's offensive output, but defense won the day and Winlock held Valley without the offensive juggernaut that is Hernandez.

“He could be playing with a serious injury, but you can't hold him back," said Tauscher.

Winlock is now 9-12 on the season and will face Morton/White Pass in the semi-final round of the District IV Tournament. MWP has defeated the Cards by the scores of 58-48 and 63-45 in previous games this season. 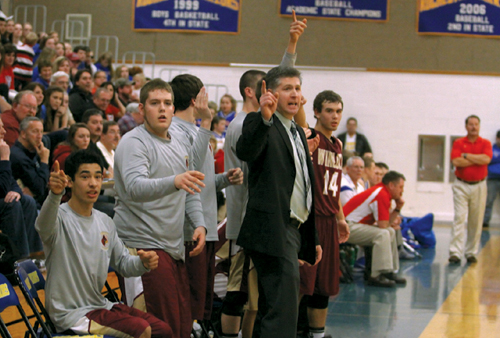 Winlock Head Coach Dennis Tauscher and his bench players assist referees with a position call against Willapa Valley on Saturday night in the District IV playoffs.  The Cardinals won the quarter-final match-up 58-51.