Winlock takes only Battle of the Cowlitz this year 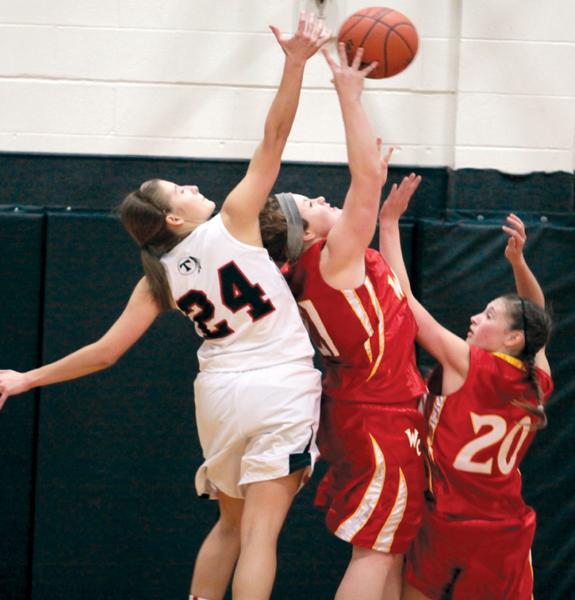 Toledo's Denacia Oberg (#24) battles Winlock's Dustee Alvord and Rianna Whitehead for a rebound Dec. 4 during the one sports match-up between Winlock and Toledo this season.

The Winlock/Toledo sports rivalry may not be what it used to be, but don't tell that to any of the basketball girls on the George Murdock floor Wednesday night at Toledo High School during the only athletic meeting of the two schools this school year.

The Winlock girls came out focused, reeling off 13 and then 18 points in the first and second quarters respectively behind pin-point shooting during a 50-39 non-league game on Wednesday. When the lady Cardinals didn't have the ball, they were making life miserable for Toledo with a harassing ninety feet of defense.

"We looked good in the first half," said Winlock Head Coach Scott Ashmore. "We were getting after it. We were moving, we were rotating. I will take that first half any day of the week or any day".

During the second half, Toledo found their team chemistry and fast break and actually outscored Winlock 25 to 19, but it wasn't enough.

Sydney Bradley scored 13 points in the first half, but finished the game with 15. Dustee Alvord got hot in the second half and put up 13 points.

Victoria Tjemsland admitted the rivalry dates back to at least her elementary years and was lauded for her great front court play on Wednesday. She scored 8 points for the Indians.

"Our defense in the first half wasn't what it usually, and Winlock took advantage," said Tjemsland. "But the past is the past, and we're looking forward."

That was evident in the second half when the Indians started finding their fast break.

"We got tired," said Ashmore.

Despite being seemingly outplayed in the second half, Ashmore says he likes what he has on his bench.

The Toledo/Winlock rivalry is almost becoming a non-subject. Most teams now combine and the few teams that are independent are not scheduled to play each other. On the floor Wednesday, girls that were teammates just weeks ago on the soccer field found each other wearing different colors.

"Playing against my teammates was a little weird since I'm used to playing on a team with them," said Winlock Guard Caroline Garibay. "But it's definitely an awesome feeling beating them."

With only one meeting between the schools this year, this is a feeling Garibay and the rest of the Cardinals and Indians will feel just this once.