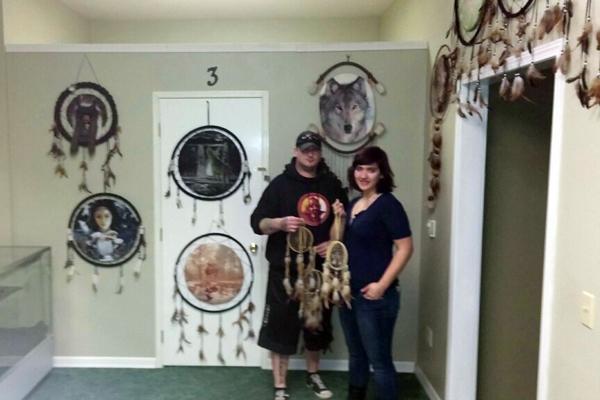 Winlock Antique Mall Owner Jesse Martin (left) and Manager Kat Allred (right) in the store's new dream catcher display, which sells handcrafted dream catchers made by members of tribes all over the area.

The Winlock Antique Mall has announced a new display of dream catchers will be opened soon, boasting what owner Jesse Martin said would be the largest selection in the state.

Handmade from members of tribes across the area, the dream catchers, which include some of the more traditional circular designs as well as some three-dimensional versions, are part of what Martin said was his fascination with local history as well as Native American culture.

When speaking Friday about the dream catcher display, manager Kat Allred said residents have already expressed an interest in the new section of the antique mall, and said the completed display will include information about each specific piece.

"People can kind of get the idea of...what they're all about," she said, stating a book telling the larger story of dream catchers will also be part of the display.

Allred said Martin hopes soon to also add a display of arrow heads to add to the historical and cultural experience of those viewing the new items.

The Winlock Antique Mall is located at 100 SE First St. and includes a number of rooms featuring items sold by vendors and on consignment. For more information, call (206) 214-6097.