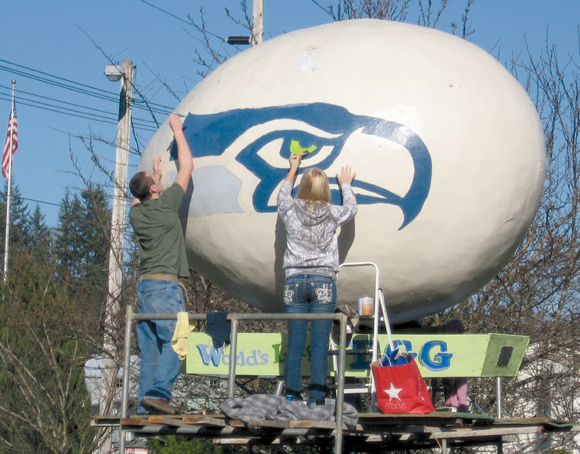 Volunteers Mason Gaul (left) and Melody Reilly (right) help paint a Seahawks logo on The World’s Largest Egg, in Winlock, Saturday morning to celebrate the team’s entry into the Super Bowl. The design had been inspired by a viral Facebook image of such a logo edited onto the egg by local resident Tim Reisbeck.

Have you seen the Facebook picture of a Seahawks logo painted onto The World’s Largest Egg, in Winlock?

A lot of people have over the last couple of weeks, and many excited fans from around the area—even as far as Seattle—came to take a gander at the small town’s expression of Seahawk pride.

But if they showed up before Saturday, they would have found out the viral image had just been a conceptual rendering by Winlock resident Tim Reisbeck, inspired by conversations about how the egg had been decorated in years past.

But now the Hawks are going to the Super Bowl, and community members see no reason why their pride in their town and their team should not live up to the hype generated online.

“I think Winlock rocks the 12th Man,” said community member Debbie Wickert, mother of Reisbeck and the first to post the viral photo online Jan. 13. “It took off…people from different states were contacting us.”

Wickert said she eventually approached Winlock Mayor Lonnie J. Dowell with the idea of bringing the photo into reality, and Dowell, in turn, approached the Winlock Lions Club Thursday with the idea and was met with enthusiastic support.

“I am very appreciative that the Lions Club is doing this,” said Dowell, who was on hand Saturday morning as volunteers scrambled scaffolding to decorate the egg.

Spearheading the painting efforts was Toledo Art Instructor Ron Gaul, who is no stranger to painting Winlock’s monument to prolific local egg production. His past efforts include an Easter egg design, chicks for Egg Days, and, most recently, an American flag to honor the victims of the World Trade Center attacks back in 2001.

“We actually picked a great day to do it,” said Gaul of Saturday morning, stating it may have begun with frost on the egg but became sunny during the remainder of the hours they worked.

The design featured a Seahawks logo on the north and south sides of the egg, and a number “12” on the east side, facing the railroad tracks. Gaul had created a stencil for the patterns using a piece of tarp and was assisted by former students Mason Gaul and Melody Reilly. When the egg was done, Gaul turned his attention to one of Winlock’s decorative roosters just across the road, giving the bird vibrant plumage of Seahawk green and blue.

Their work was finished by around 5 p.m., and had been met with honking horns and cheers of “Go Hawks!” from passing motorists. Lions Club member Leroy Zwiefelhofer said the plan, should the Seahawks win the Super Bowl, is to keep the decorations up for a little while longer, though they will certainly remain up through Sunday.

While watching the logo coming to life, community member Barb Lewis observed how the many groups involved were, on their own, a strong representation of Winlock’s spirit and pride. 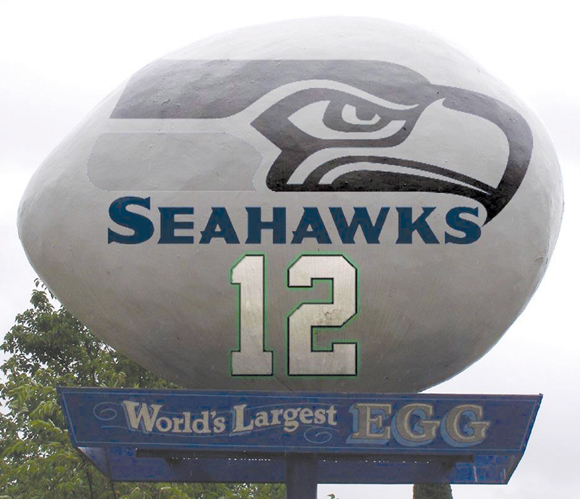 The viral photo that inspired the painting of the logo, was posted on Facebook Jan. 13 and quickly received wide-spread attention from individuals thinking it was real. 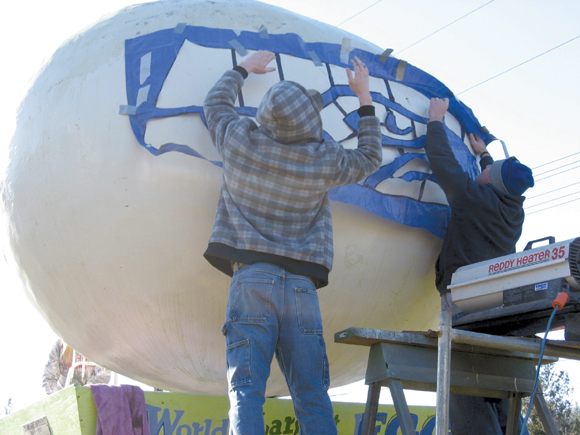 Mason Gaul (left) and father Ron Gaul (right), a Toledo art instructor, trace the logo on the north side of the egg using a stencil Ron Gaul created out of a tarp. 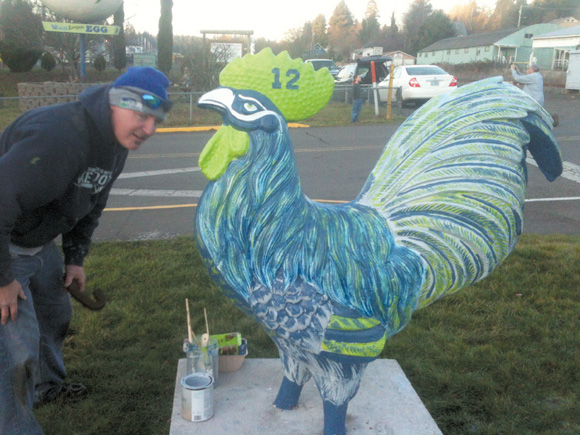 Ron Gaul surveys the new Seahawks paint job on one of Winlock’s chicken statues, this one located right across the street from the World’s Largest Egg.