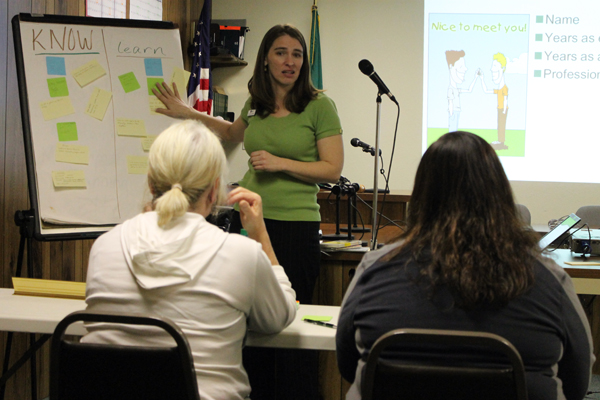 RosAnna Noval (background), an environmental rural development specialist for Rural Community Assistance Corporation, discusses the finer points of her company's ongoing study of water and sewer rates with the Winlock City Council Feb. 23. She said the goal of the study, funded by the state, is to help the struggling city make the best-informed decisions they can regarding rates for utilities.

The Winlock City Council has taken their first step in the process of studying the city's water and sewer rates, with a list of recommendations expected by sometime around May.

Though a study of the city's sewer rates has been under way since last fall, the council had their first in-depth exposure to the details and intent of the study during a workshop held before their regular meeting Feb. 23.

Noval said the goal will not necessarily be to help the city find ways to reduce its rates, which a majority of officials present said were far higher than most residents can afford, but rather to collect and present information about the water and sewer systems in a way Winlock can begin to make better-informed decisions about the way its utilities are managed.

"The goals are that the city's going to be able to make informed budget and rate decisions for the utility, and that the decision-maker knowledge of the budgetary needs, and the basis of your rates, will increase," she told the council. "So you're going to be able to make better decisions because you have better information and knowledge about it."

Noval said, as a starting point, she wanted officials to understand the difference between charging what their customers can afford and charging enough to keep their utility running, because sometimes a city is able to do both but other times they are obligated to weigh one against the other.

"At the very least, your rates need to be paying for all of your costs," she said of how RCAC will be looking at Winlock's rate structure, stating it is a legal imperative for a city government to charge at least enough to keep the system running, whatever those costs may be.

She also said it is an imperative to maintain the system at such a level it will continue to be operational for future generations, which can require setting aside enough money to pay for emergencies and repairs out of pocket rather than attempt to depend on grants and loans, which may not always be available or guaranteed.

"It is your job to make sure that, in 10 years, in 20 years, when your kids leave and come back, that there's still a water system, still a sewer system here," she said.

Aside from the costs to maintain the utilities, Noval said RCAC will go through each budget to ensure only water costs are being paid for from the water system, and only sewer costs are being paid for from the sewer system. Not that they are expecting to find funds being mismanaged or improperly diverted, but sometimes budgetary items are simply miscategorized and can go unnoticed until someone points them out.

She said RCAC will also look at how different utility customers are charged compared to each other, stating some cities develop many different categories of customers based on usage, zoning, age, income and other factors and, when raising rates to account for general costs increases, some customer categories may go up while others can be overlooked and remain unchanged.

She added other factors such as seasonal events, like more customers watering their lawns in the summer or snowbirds traveling out of the area during the winter, can have an impact on how the city appropriately charges for utilities, and will be examined as well.

Noval said the council's level of participation during the process will depend upon their desire for involvement, stating some cities leave the matter up to their staff to interact with RCAC, while others insist on regular meetings and updates, which would be just as appropriate, she said.

As of the workshop, the next meeting between the council and RCAC will be later this spring when the final report will be presented, though the council reserves their privilege to call for sooner meetings, if so desired. Officials stated after the workshop they are still taking in all of the information presented by Noval, which included handouts on budgetary and utility management for small cities, stating they would like to review of the information before seeking further action.

Copies of the information provided by Noval are available to the public through City Hall, as well as through RCAC's website at http://www.rcac.org.