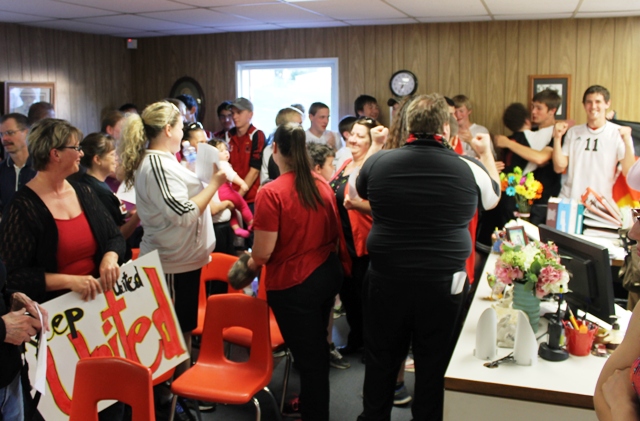 A packed school district office erupts in celebration after the Winlock School Board decides to continue the combined boys soccer program during a special meeting of the board April 30.

The Winlock School Board has decided to maintain a combined boys soccer program with Toledo, while students and parents say they could not be more excited with the decision.

In a 2-3 vote during a special meeting held April 30, the district declined to withdraw from the program, allowing athletes to compete together for another two years until both districts are asked to renew again in 2016.

“I’m very proud of my school district,” said Winlock parent Brandon Patching after the vote. “They did what we all said was the right thing to do…this feels like a huge, huge victory.”

Winlock had considered withdrawing after the Toledo School Board voted Feb. 20 to withdraw from combined girls soccer, baseball and fastpitch due to the district’s reclassification from 1A to 2B by the WIAA.

Toledo officials had said remaining combined would require them to continue competing as 1A in those programs, requiring travel to distant schools for games, though they kept boys soccer intact because no local 2B league exists.

While the Winlock School Board initially voted to maintain all combined programs, they stated during their March 20 meeting they were interested in exploring alternative schools for combined boys soccer, then stated April 16 they would be interested even in opting up to a 1A league as an independent program.

But during their April 30 meeting, which had been scheduled due to the presence of only three out of five board members April 16, the majority of board members said it was not in the program’s or the students’ best interest to withdraw.

“I think the bottom line is that we care for what the children, these students and young people, really want and need,” said Board Member Kay Raupp, who had been among those absent at the April 16 meeting.

Also absent April 16 and in support of remaining combined was Board Member Scott Weinert, while Board Chair Pam Spencer contributed the deciding vote in favor of maintaining the program.

Opposed had been Board Members Duane Bryant and Fred Terry, who had both expressed an interest in pursuing an independent Winlock program both to strengthen the district’s offerings as well as its athletes.

After the vote, a room packed with students, parents and coaches erupted in celebration, with hugs and cheers and even a few wet eyes. Outside, amid a circle of team members, Soccer Coach Horst Malnaut told his students it is now their imperative to show both Toledo and Winlock how seriously they take the program.

“Lets show this school board that decided to keep us together that it was worth it,” he said, stating he has been encouraged by the support his team has received from both Winlock and Toledo residents.

“It’s been a weight off my shoulders,” he later added of Winlock’s decision to remain combined.

But concern remains over the other now-dissolved programs of baseball, fastpitch and girls soccer, as some parents have stated their intent to petition Toledo to restore at least girls soccer after Winlock’s decision to sustain the boys’ program.

Toledo parent Amber Buck said it is her hope to speak with the Toledo School Board and urge them to reconsider, stating the way the district went about their decision to withdraw from the programs had not been forthcoming or fair.

“That’s a community decision,” she said, stating she and other parents were not notified of the district’s intent to pursue such action or asked how they felt about the issue, stating she felt such a lack of transparency ought to invalidate the board’s vote.

But Malnaut said Toledo has already committed to 2B fastpitch, baseball and girls soccer for the coming school year and will not be able to reform the teams just yet.

Also part of discussions regarding Winlock’s and Toledo’s shared sports programs had been wrestling and cross country, which both boards had decided to maintain because the students in those sports compete individually and a cooperative program would not affect their league competition.

When asked to reflect on Winlock’s decision, Superintendent Shannon Criss acknowledged the board does not take such issues lightly and praised them for giving the community an opportunity to voice even opposing viewpoints in the matter.