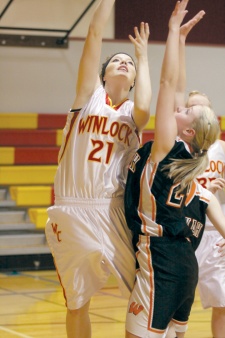 The Winlock girls scored their second victory of the year blowing by Wishkah Valley 57-11 in a non-league contest at home Saturday night.

Sydney Bradley led all scorers with 18 points while Jasmine Lopez contributed 12 and Cecila Stalcup added 11 more. Head coach Scott Ashmore said he wanted to work on their man-to-man offense, but the Loggerettes pulled out of the standard defense in favor of zones. Regardless, Ashmore said it was good for the girls to experience successes where there has been failures this season.

"Girls were hitting those little two-foot shots that we have been missing all season and making passes that are always contested," he said. "We were getting good looks inside and finishing."

Ashmore wasn't smiles about everything however.

"Their man defense was better than ours," he said. "We talked about that at halftime."

"It felt good to finally be the team that didn't score the lowest points," said Winlock big Cecilia Stalcup who scored in double figures for the first time this season.

On Tuesday night, the girls played a strong game against powerful Napavine, staying within four points at halftime. In the second half, however, the Tigers asserted themselves and eventually put the Lady Cardinals away 68-37. Jasmin Lopez scored 14 points while Dustee Alvord added 13 in the loss for the Cardinals.

Thursday became a forgettable night with a 56-12 Central League loss to Toutle Lake. Winlock is now 2-15 on the season and 0-13 in the Central League. They will travel to Onalaska on Tuesday, Morton-White Pass on Thursday and then host Pe Ell on Saturday. The Winlock girls had no seniors to honor during their last home game this year.