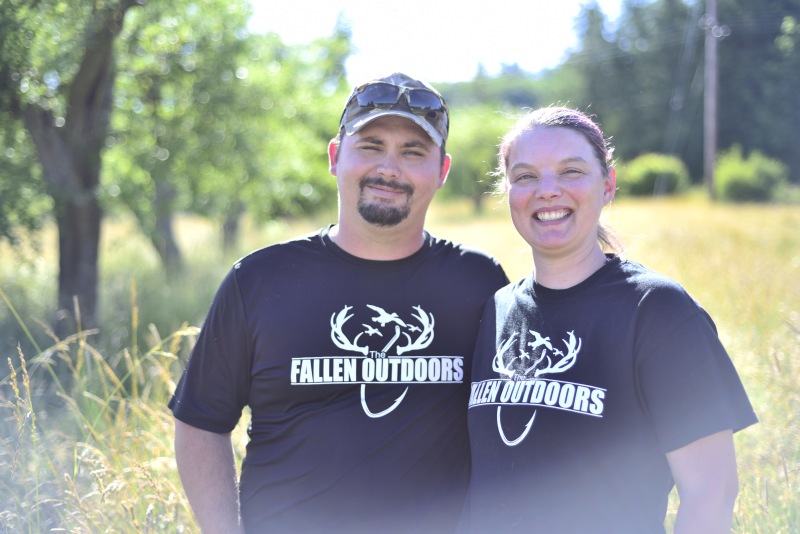 Andrew and Shasta Morton seem like just your normal young couple living in the Winlock area, that is until they start to talk about the charity with which they're involved, The Fallen Outdoors. The pair are giving back to our veterans in a big way.

The founders of The Fallen Outdoors are Eric Bakken and Tim Adams, who started the organization in 2009. It currently operates in 39 states with thousands of volunteers nationwide.

Andrew and Shasta Morton work full time as volunteers for The Fallen Outdoors, sometimes exceeding 40 hours a week. The motivation for Andrew came because he was in the Army and wants to give back to his fellow service members. Andrew spent 12 years in the Army and loved his military family. He returned to the area after leaving the service and started taking veterans on outdoor adventures on his own. After six months he learned about The Fallen Outdoors and quickly became a part of the charity.

"It's the experience you get in brothership/sistership," Andrew stated of the veterans he serves. "It can save their lives. Fishing is very therapeutic. You see the better side of veterans when you get them out of their comfort zone. You get to talk to them just like you [would] when you were in the military. They are still your family."

The Morton's have been with The Fallen Outdoors for 2 1/2 years as a husband and wife team. Shasta is Andrew's support person, keeping Andrew on track daily with the many outdoor events he is involved with.

The Fallen Outdoors raises funds through donations received at different events throughout the state, as well as merchandizing, firework sales, and an annual banquet.

Andrew is very busy this summer volunteering with veterans. He had just finished the Puyallup Fair Sportsmanship show when he spoke with the Crier. There, he was educating others about The Fallen Outdoors and the different events the organization does throughout the year. For instance, the charity holds a "25 Days of Christmas" event nationally in which they gather $250,000 worth of prizes, including fishing poles, fishing trips, hunting trips (all varieties), gear, and even a fishing boat. Every day of the event a video is put out and any veteran who joins through Facebook has the opportunity to win a prize.

Locally the charity's activities include their annual sturgeon fishing trip on the Willamette and fireworks stand in Battle Ground. They have a Facebook page that shows what they are up to and some of the events they have planned, and it also allows veterans to sign up for the outdoor adventures organized by the charity. The organization is always looking for more volunteers as salmon and steelhead fishing is open right now.

The Fallen Outdoors is open to every veteran regardless of status. The organization helped 10,000 veterans nationally last year.

Andrew and Shasta Morton have four children: Todd, Melissa, Matthew, and Riley. All live out in the country in Winlock. It's not unusual for the Morton's to take one of their kids with them on an adventure. It's a family affair, and this includes their military family as well.