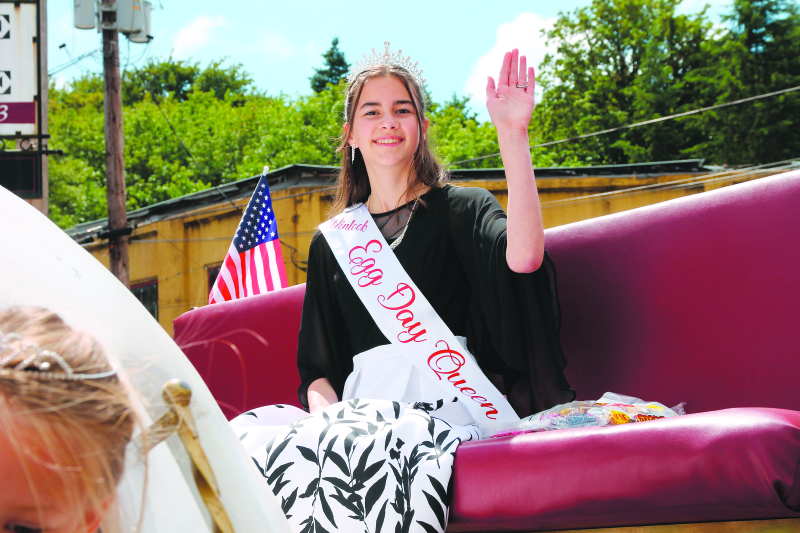 Winlock Egg Day started off with the Coronation of the Egg Day Queen Elora Smith on Friday night. Elora has the honor of representing Winlock in festivals throughout the year. Congratulations Elora!

Saturday morning started off early with breakfast at the senior center. Geno Wilbur was down volunteering as were several others. Then it was to downtown to see all the vendors, classic cars and finally the parade.

When you head downtown to see the classic cars you were able to see 115 cars in the car show. This year Rick Avery with his 1970 Volkswagon won the people's choice award and a trophy from the Renegade Rooster. The car show is a great way to spend your time before the parade gets underway.

The parade was wonderful this year, there were four Good Ol' Eggs: Dick Dorothy, Mary Ann Longsine, Rita Ruether and Dwaine Miller. This year they were individuals who have lived in Winlock most of their lives and were over the age of 80. They rode in Model As except for Dwaine Miller who drove his own Model A.

This year there were floats from many neighboring communities, Morton, Toledo and Vancouver brought a caboose.

Winlock High School band played in the parade as did the American Legion. There was only one log truck this year. Thank you Randy Booth for honoring your brother Gary who was killed in action in 1970.

When all was said and done, it was a great parade with many local people participating.

Several former graduates of Winlock were in attendance as well, it was great to see Eric and Mike Bay. The majority of the Titus clan were here as was John Jones. Denny and Linda Mickelsen were here from Eastern Washington. Coach Stultz's son Mike came to town , as was as Debbie Peckham who came from Idaho, something she has done the past few years. There were also visitors who live in nearby cities, Ron and Susie Smith from Toledo and Jerry and Debbie Graham from Napavine.

After the parade one of the most important traditions takes place, the handing out of the Egg Day sandwiches. If you have never had one of the egg salad sandwiches prepared by many, you are missing out. Many of us look forward to this all day long.

There were many events around town, from the bounce house at the community building to youth activities at the stage coach. There were also a lot of vendors around, both food, nic nac's and informational. The Winlock Historical Museum was open as was the Renegade Rooster.

Winlock Eggspress stayed open late to feed the masses, Franks had a live band on Friday night and on Saturday night The Club had their street dance.

Winlock Egg Day is a special event for all of us, thank you to everyone who helped Egg Day a success.