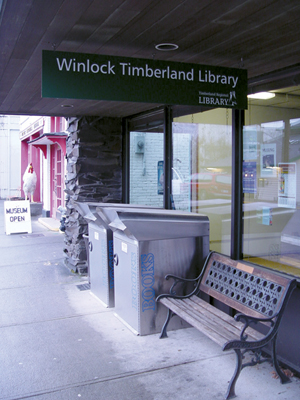 The Winlock Timberland Library in Downtown Winlock is a fixture of the local community, but shrinking city budgets have caused officials to consider allowing for a library-specific property tax.

Winlock voters may soon be asked to approve the annexation of the Winlock Timberland Library, which would separate it financially from City Hall by allowing the taxation of property owners within Winlock.

Proposed by Council Member Dennis Korpi during the Jan. 28 City Council meeting, Korpi said annexation would free up $28,000 in Winlock’s annual budget by eliminating the current contract for services with the library.

“Just about everybody in the state that deals with TRL [Timberland Regional Libraries], they’re annexed, they don’t have contracts,” said Korpi, stating the $28,000 could then be used to replenish financial reserves drained by recent sewer plant and infrastructure expenses, as well as complete large maintenance projects for the library building, which remains city property.

“By moving to annex, that takes that expense off the city budget,” he said, describing how property owners within the district are currently paying $0.415 for every $1,000 of assessed value, which is then pooled together and distributed by the District Board based on budget proposals.

By voting to annex the library, Winlock would be added to the TRL District, which currently includes Toledo and the unincorporated areas of Lewis County. (Locally, Napavine and Vader are not part of the district and do not pay the property tax, but residents must then pay an individual annual fee for services in the absence of a library contract.)

When the idea of annexation was before Winlock in 2000, then-mayor Don Bradshaw said the issue of higher taxes was one that kept city leaders from adding it to the ballot that year. He added concern over the availability of services to those living outside the city after annexation was also a sticking point, stating he was not able to obtain a clear answer from TRL officials at that time.

“We decided to stay the way we were because of those two issues,” said Bradshaw.

Kleingartener said annexation would not effect the way current members are allowed to use Winlock’s library, stating such concerns were prominent when Shelton and Hoquiam voted to annex their libraries in recent years.

“This would not affect service,” said Kleingartener, stating at no point would the library close or change locations, adding TRL values the Winlock Timberland Library due to its proximity to district members and high level of use.

The council has yet to meet with Kleingartener or other TRL officials, but plans to invite them to a workshop soon to address outstanding issues, most notably when annexation should be placed on the ballot.

According to the Revised Codes of Washington, a library district must define its taxation boundaries on Aug. 1 for each following year, meaning a vote on the issue this November would not include Winlock within the district officially until Aug. 1, 2014.

Korpi advocated for placing annexation on a special election ballot in April, but doing so would cost Winlock several thousand dollars in fees to the Auditor’s Office whether or not annexation passed.

A consensus from the Council on the issue of library annexation was not expressed that night, though there was no marked opposition, either. A workshop with TRL officials is expected to take place sometime in the next week and, depending on the number of council members present, may or may not be open to the public.