Winlock City Council contradicts themselves, Commissioner Jackson calls them out 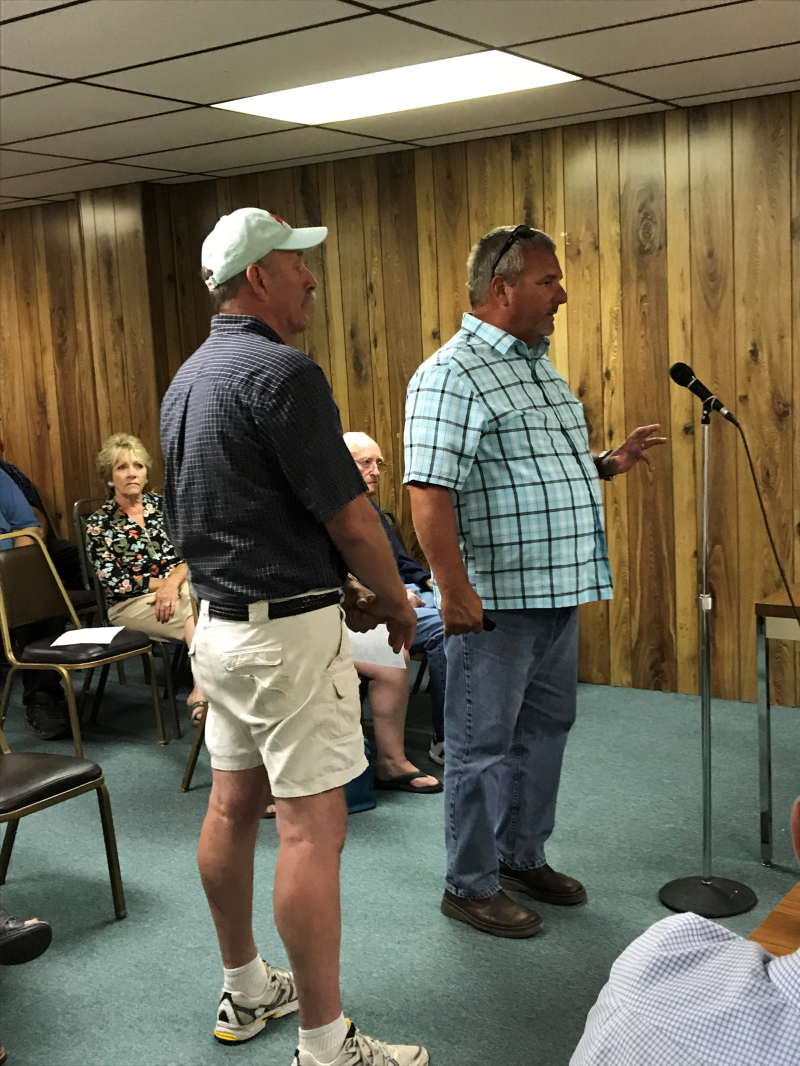 Photo by Lynnette Hoffman - Jim Henderson, President of the Lewis County Senior Board and Bobby Jackson, County Commissioner speak to the Winlock City Council about ownership of the Olequa Senior Center during Monday's city council meeting.

Spilling into the street, the Winlock City Council meeting on August 28 ended with contention over the ownership of the Olequa Senior Center. There are several events that occurred which have upset the seniors and volunteers at the center. The City Council started to discuss the senior center on record in their July 24 meeting and has continued since that date.

On August 14 at the city council meeting, they asked City Attorney Mark Scheibmeir to send a letter to the Lewis County Commissioners asking if the city could own the building. The City Council brought up the article from the Chronicle dated August 11 regarding the possibility of leasing the building from the county for fair market value. This was only a possibility. Nothing has been decided as to ownership of the buildings and land.

On August 28 there was even more confusion. When the agenda item of the Senior Center was brought up, Councilwoman Sarah Gifford stated, "the city did not want the possibility of taking over the senior center. I have the notes right here." She went on to talk about the only reason the city was looking into ownership was due to the recent article in the Chronicle talking about leasing it back to the seniors. She said the councilors knew the city could not maintain or operate the building contradicting interest shown at the July 24 meeting.

County Commissioner Bobby Jackson, who had been at the July 24 meeting, stated in the last council meeting, "the previous discussion we had when I was here before was about the possibility of the city of Winlock taking the building over." There was a loud applause from the audience after he spoke. After calling out the council for saying that they would look into the ownership of the building, Jackson suggested that the council support the new senior board.

Former Mayor and Board Member Don Bradshaw stated, "the council is using this as a mis-direction because they can't do their jobs. If only they would step out of city hall and see there are projects they are responsible for. The majority of the council needs to stop acting like unruly third graders playing dress up and do your job." Bradshaw also had words for council member White. "Stop using the council platform to run for mayor and just do your job."

Once the meeting was concluded, several members of the audience went outside to discuss the meeting. Shortly thereafter, council members Holly Orbino and Gifford, along with Mayor Lonnie Dowell came out to speak to the crowd about their desire to own the building and land. Contrary to Gifford's statement at the city council meeting, their personal opinions are that the city should be the owners of the building but leave the maintenance and operations to the new board.

Gifford stated to several people outside that the Senior Center Board was going to fail. She spoke to several workers at the county, but she has not talked to the individuals making the decisions on the senior centers. Several attendees's dismissed it as gossip.

Dowell was also on the sidewalk talking about the senior center and the budget. At one point he stated that the senior center would not cost $100,000 to run if they did not have a site leader (current site leader is Lindsay Giberson) and had the volunteers do all the work and pay for the maintenance. Dowell also has the personal opinion that the city should have ownership of the building and land.

Orbino was seen screaming on the street, "I am not Sarah." She was referencing the comment by Gifford during the city council where Gifford stated the city council did not want ownership of the building and land. When Gifford spoke during the meeting, not one council member corrected her comments about their desire not to own the center but the minute council was off the record they changed their stance on ownership of the building and land.

Several seniors have stated they do not want the city involved in the senior center. They want the Lewis County Senior Board to own and operate the Olequa Senior Center.

Finally, Winlock City Council members were invited by Commissioner Jackson and Jim Henderson to attend the Lewis County Senior Board on August 31 to listen to what the board is discussing. Not one city council member attended nor have they formally discussed the Olequa Senior Center with the Board of County Commissioners. Without the knowledge from the Board or the Commissioners, any talk as to what is happening with the senior centers is merely gossip.