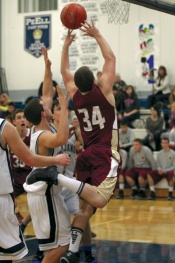 Winlock senior Mike Blum goes up for two of his 12 points against Pe Ell on Tuesday night. The Cardinals added two wins in Central 2B League play this week.

The Winlock boys basketball team has found a bit of a groove as they scored two Central League wins this week. The first was not much of a surprise, but Friday’s triumph in Wahkiakum had a bit of that "shock the world" essence to it.

On Tuesday, the Cards jumped to a 12-2 advantage as Caleb Rose hit a trio of three pointers and Enrique Hernandez hit another for the quick lead. The home-standing Pe Ell Trojans methodically came back and led for much of the second and third quarters.  Winlock came back behind the strong play of Hernandez and Mike Blum for a 65-58 victory.

Hernandez finished the game with 25 points and seven rebounds while Rose left the floor with a nagging ankle injury and 12 points in the 4th quarter. Blum recorded a modest number (four) of rebounds, but for the first time this season, he made a significant contribution in scoring with 12 points. Chance Fisher led the Winlock rebounding with 11 points.

Of course, there is a lot of discussion about Hernandez, who can't help but grab the eye of local coaches, fans and media. He averages 18 points, seven steals and four points a game this season but his turnover average has come way down since early in the season from as many as four per game to the current 1.6.

"I haven't seen every game that he played in his career, but I think he is playing the best basketball I have seen him play," said Winlock Head Coach Dennis Tauscher. "As a point guard he has to be a leader and he knows that."

On Friday night, the Cards traveled to Cathlamet, to hoop it up with the 9-2, highly ranked Wahkiakum Mules. Again, it was the Cardinals that jumped out behind the hot shooting of Hernandez and Skylar Tremayne only to have the Mules come roaring back for a 26-19 halftime lead.

With Caleb Rose sitting in the stands in street clothes, it was Tremayne and Cory McNelly that plugged the hole for a second player to fill in the offensive void. Tremayne shot four for four in three point shooting and finished the game with 14 points.

It was particularly rewarding for Tremayne who wears a shoulder brace after three surgeries for a separated shoulder. His once pin-point accuracy as a three point specialist has been lagging.

“It felt good," he said about hitting the shots. "I am still getting used to the brace, but I am starting to feel it come back."

McNelly added solid defense and few but key points.  Big man Chance Fisher hauled in 15 rebounds and the sum total downed the Mules on their own floor.

Of course Hernandez was grand again with 24 points and 12 rebounds (from a 5'10 guard).

The second half was marked by defense as Mike Blum and others took turns on Mule big man Eli McElroy who dropped 20 on the Cardinals earlier in the season while the outside shooting for Wahkiakum was pitiful. The Cardinals outscored the their home standing opponents 36-15  in the second half.

"They were going to win the game,” said Tauscher. “It was an attitude that they decided not going to give up and finish what they had started."

Winlock is now 3-8 overall, and 3-6 in league and will have a busy week. On Tuesday, they travel to Northwest Christian in Lacey for a non-league match and then on Wednesday and Saturday they will host Adna and Mossyrock respectively.