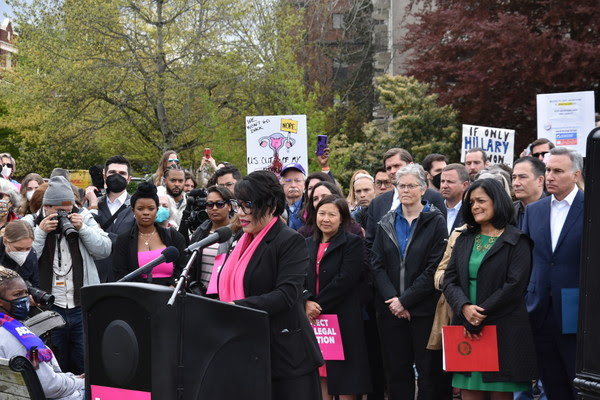 Photo Courtesy Gov. Inslee Staff - Jennifer Martinez, PPAA's board president who spoke of her experience as a patient and soon-to-be-parent. Hundreds of people attended the press conference and rally at Kerry Park in Seattle.

This (May 2-9) a draft decision of the Supreme Court of the United States indicated its intent to overturn the country's decades-old constitutional right to an abortion guaranteed by the 1973 ruling in Roe v. Wade.

On Tuesday, dozens of state and local leaders attended a press conference and rally with hundreds of community advocates and reproductive care providers. Their shared message was a full-throated affirmation that Washington state is and will remain a pro-choice state dedicated to serving any person who needs access to a safe, affordable abortion.

As many as 26 states are poised or likel;y to ban abortion as soon as the court overturns Roe. This includes Washington's neighboring state of Idaho which has a "trigger law" that would go into effect immediately.

This means patients will have to travel to states like Washington for abortion care. Providers are preparing for a large increase in the number of patients seeking services. Gov. Jay Inslee said during Tuesday's press conference that state leaders are exploring options for expanding access and legal protections.

Washington state has some of the first and strongest abortion rights in the nation. The state's voters legalized abortion in 1970 by passing Referendum 20. In 1991, during the lead-up to the first major Supreme Court challenge to Roe v. Wade - a case known as Planned Parenthood v. Casey - Washington voters approved I-120, also known as the Reproductive Privacy Act.

This pending court decision highlights the crucial role governors and state legislatures play in protecting access to such care. Even in Washington state, extremist legislative Republicans have introduced approximately 40 bills in the past six years that would roll back access to abortion and contraception.

But Democratic majorities continue to defend full access to safe and affordable abortion. In 2018 Inslee signed the Reproductive Parity Act, sponsored by the current Secretary of State Steve Hobbs, that requires all health plans that include maternity care services to also cover abortion and contraception. Earlier this year Inslee signed the Affirm Washington Abortion Access Act, sponsored by Rep. My-Linh Thai, that better ensures the ability of Washington abortion care providers to serve any person who comes in Washington state seeking an abortion. The access bill was passed on a straight party-line vote in both the House and Senate, and the parity act passed with only a couple Republican votes.

"There is so much honor in this line of work, and it is only matched by the humility of these officers and their families," Inslee said. "A fallen officer's death is not the end of their story. It is simply the beginning of how we reflect, contextualize and take even greater meaning from what they gave us and how our lives can be a blessing to others by following their example. Their memories will live on alongside the other fallen troopers from 100 years of the agency's existence."