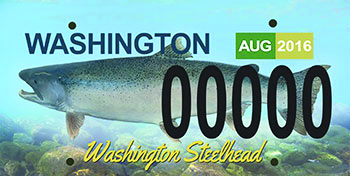 The Washington State Legislature requires that WDFW show that 3,500 plates are intended to be purchased before they will consider the proposal.

A special license plate featuring a steelhead - the official state fish of Washington - could be an option for vehicle owners if a proposal for the new plate is approved by the state Legislature.

The Washington Department of Fish and Wildlife (WDFW) is proposing the plate to generate revenue that would be used to help support activities critical to conserving populations of native steelhead.

In much of Washington, native steelhead are listed for protection under the federal Endangered Species Act. WDFW is currently taking several actions to restore those populations to sustainable levels, including measures that guide fisheries management, hatchery operations and habitat-restoration programs.

Before the state Legislature can consider the proposal, state law requires WDFW to show that people intend to purchase at least 3,500 plates, which would be available for cars, motorcycles and trailers.

People interested in purchasing steelhead plates can submit a signature and indicate the number of plates they would likely purchase on WDFW's website at http://wdfw.wa.gov/license_plates/steelhead/. The website includes additional information on the proposal, as well as an image of the plate.

Submitting a signature is not an obligation to buy a plate.