Wallace's Pond getting too warm 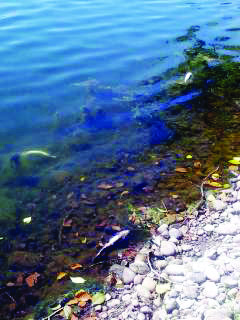 Residents noticed a few dead fish along the banks of Wallace's Pond. They counted 111 on one day.

A walk in the park turned out to be a little more than a couple of girls from Lewis County were expecting, last week.

"We went out for a walk at the South Lewis County Park Pond (Wallace's Pond) and started seeing dead fish," was the story from Katie Mullert and Madison McLean.

When they were done they had counted at least 111 dead trout in and around the pond.

Alarming the family of the girls was that the day prior, on another daily walk, they had noticed families enjoying the park, picnic's and fishing. But when they witnessed the fish the following day they started to get concerned about what might have happened overnight.

"The previous day we did see families at the park having a nice time, nothing out of the ordinary. We were surprised when we started seeing dead fish the next day."

The family notified Lewis County Department of Health who in turn called upon the Environmental Department who went out to investigate.

The pond has an ongoing issue with blue/green algae and has signs posted warning people, but preliminary investigations prove the temperature of the water becoming too hot of an environment for the fish.

Mike Strozyk of the Lewis County Environmental Department reported that the conditions in the pond made the habitat for the fish uninhabitable.

"We are still looking at the issue, that means the Department of Fish and Wildlife who have jurisdiction over that body of water is still conducting their investigation," said Strozyk.

The pond was stocked in April of this year with several varieties of fish for youth fishing derby's and the opening of fishing season. Early reports on the pond are that the trout are the only fish impacted by the higher temperatures and that it does not pose any threat to other fish or humans.

"It does not seem to be associated to any algae at this point. Only that the warmer than average temperatures that we have been experiencing is the very possible cause," noted Strozyk.

Supporting the findings in Lewis County other areas have been reporting dead fish as well, as far down as the Columbia River. Several streams and ponds are showing signs of the reduced amount of rainfall and warmer temperatures during this summer.

But for now residents should not panic about the fish but keep an eye out for additional signs in smaller ponds and streams and contact the Department of Fish and Wildlife with any findings.