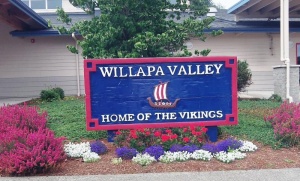 Photo by Kayla Camenzind Willapa Valley Superintendent Rob Friese is optimistic about the school’s future, explaining that the school has more programs to offer than most small schools and that enrollment has stabilized at around 300 students.

Superintendent Rob Friese explained that the Valley School District budgets and spends conservatively. While the budget allows for around $13,000 to be spent per student, Friese said that the school plans to spend around $8,000 per student. “I want to end up with a good budget at the end of the year, so we’re pretty conservative. Even though we budgeted, like last year we budgeted 290 [students] and we actually ended up with . . . an average of 316 I think for the year. . . We’ve been really stable at around 300 students for the last three or four years so I think we’re going to be right there again, and we’re hoping that we can end up with 310, 315 again.”

Friese said that having a lower student count at Valley is beneficial to the quality of education offered although it adds strain to budgeting.  “You may get some extra money because you don’t have as many students and you still need the same number of staff to offer the programs that we offer. . .  We’re at an advantage, I think, with smaller class sizes and I think that’s better for education. Because, in a small school, you have to have math, you have to have science, and there’s more requirements all the time with the state testing and if you don’t pass the EOC now, . . . the “end of course” exams in math, if a student doesn’t pass it they have to take math again. So what it does is it creates a situation where you have to at least have so many sections of math, regardless of how many kids are in it. In a smaller school, that’s what makes it tougher.”

Starting this year, funding from the state will pay for full-day kindergarten. Before, only half-day was funded from the state, while the other half of the expense came out of the school’s general fund.

The school gets a portion of the tax dollars the state pays when it logs land, called the timber excise tax. “If nobody’s logging because prices are down, then we don’t get that because they’re not selling the logs. . . It wasn’t going well last summer, we were getting nothing and then all the sudden December, January, the logging right now as you’ve maybe noticed is going pretty well. So we’ve been getting good chunks of money this last four or five months,” Friese said. The remodel of the Willapa Elementary was entirely paid for by saving the timber excise tax the last five years, leaving the fund with little money.

Funding provided by the state for schools will increase significantly in the next few years because of a lawsuit against the state that was filed in 2007, McCleary v. State. In the McCleary decision, the court ruled that Washington State must provide “ample” funds for adequate public education and the state must fully fund k-12 education by 2018. Friese explained, “Three or four years ago people were in a panic. . . We were cut so much funding that people were cutting teachers. Teachers were getting riffed all over the state. . . The state has stepped up to the plate much more than it was looking three years ago. . . .[The state was] putting all these different mandates on us, requiring us to do . . . all these things . . .  but you’re taking money away. How are we supposed to [do that]?”

Valley is welcoming four new teachers this year. Molly Majors, the new agricultural teacher, is an alumnus of Napavine High School and 2012 WSU graduate, with a degree in Agriculture, Food and Natural Resources and Agriculture Education. This is her first teaching position. Colby Rogers will be teaching H.S. English with a degree in English from UW, seven years of teaching in the Seattle area and 10 years of experience in Vancouver. Former South Bend teacher and Willapa Valley alumnus Jon Pearson has 14 years of teaching experience and will teach Jr. High English and Social Studies. Keith Fraiser, a Valley alumnus with degrees from WSU and Walden University, taught 5/6th grades at North River for 13 years and will be teaching 4th grade at Valley.

A statewide change to which Valley must adjust is the implementation of the Common Core State Standards, which provide across the board standards for all students in the nation and aim to put American students at the same level as students in other countries. “I think it will affect education in that we’re all going to have to make sure we’re looking at the Common Core Standards when we do things, but I believe that we’re doing those things anyway, for the most part. . . I think the Common Core Standards are still staying along those lines of what we would like all of our students to know and be able to do when they graduate,” Mr. Friese said.

“You just go online and you can go to a text book and utilize that text book,” Friese said. “It’s all tied with the state curriculum and the standards. . . It’ll save districts a lot of money in purchasing textbooks, or even software and those types of things. Basically you can go on there and a teacher can get a lesson plan. I think it’s going to be a great resource for teachers.”

Friese explained that Valley remains optimistic about Valley’s future student enrollment. “I think that programs, and good teaching staff; all that draws people to the school. I don’t think there’s anything we can do about the number of people leaving the area. . . all we can do is offer the best education that we can and hope that people choose to come here. And I think we’re doing a real good job of that. And actually we have stabilized as far as the last four years. We’ve stabilized at around 300 students so I’m hoping that will continue.”