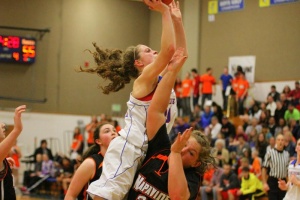 Willapa Valley is headed to the 16-team regional tournament format with a chance to go to State this weekend. The Vikings (19-5) of first-year head coach and Pacific League Coach of the Year Matt Bannish play this Saturday at 4 p.m. in Ellensburg against highly regarded Northwest Christian of Colbert.

Valley got its regional berth by defeating Pe Ell 35-26 at W.F. West High School in the District IV tournament.

“Well, it wasn't the prettiest basketball game, but it was a win that gives
us an opportunity to advance to regionals,” Coach Bannish told the Herald. “Qualifying for regionals was one our team goals we set at the beginning of the year. I am very happy for the girls and appreciate all of their hard work.

“We continued to struggle offensively today, but scored enough to pull out the win,” Bannish said.

“We got off to a real poor start in the first quarter. shooting 1 of 15, thus scoring only three points in the quarter,” Bannish pointed out. “We did a nice job to battle back and tie the game at 40 with 4 minutes to play. We expended a lot energy
during a 17-2 run and sort of ran out of gas at the end. We had some opportunities but missed some easy shots and free throws at crucial times.”

Napavine outscored Willapa Valley 38-24 in the second half to erase a 25-24 halftime deficit to defeat the Vikings 62-49 Thursday night at Rochester.
“I feel we let a golden opportunity to punch our ticket to regional slip tonight,” Bannish told the Herald. “We failed to make defensive adjustments and lost our composure in the third quarter, where the game was pretty much decided. We are a
better team than we displayed in the second half tonight.

“Lauren Friese had an amazing game with 18 points and 16 rebounds,” Bannish noted.

Raymond's season ended with a 42-41 loss versus Northwest Christian of Lacey at the District IV tournament in Montesano last Monday (Feb. 17). First Team all-Pacific League Hailee Williams shot in 19 points for the Lady Seagulls. Raymond finished the year with a 14-8 record and a second-place finish in the league.