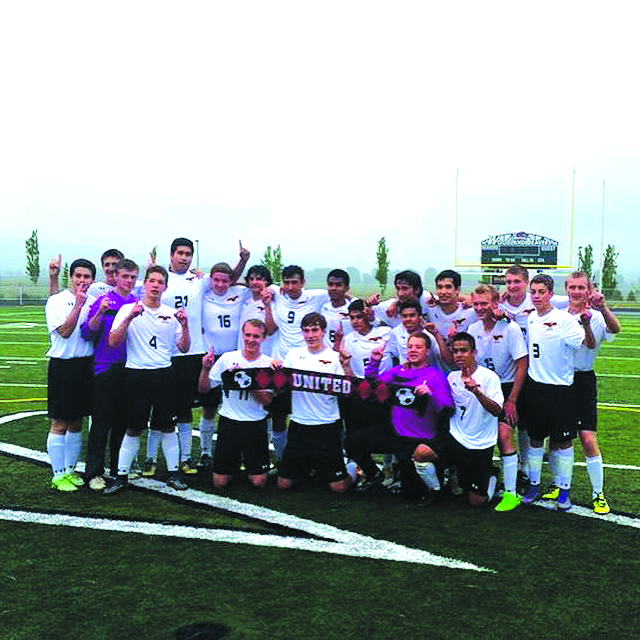 Photo taken by Lucas Patching - United poses for a picture after winning the District Championship.

Throughout the district tournament, it was evident United was out to win the trophy at the end. The trophy, though, was left at Montesano High School before the district championship game. The trophy will be given to United in the weeks to come, and the schools will have a ceremony to honor the team.

From the first round against Elma, United played its best soccer. United blew out Elma 5-0 behind three goals from senior Adair Garibay, bringing his career goals total to 99. An easy win in the first round was not expected to come in the next rounds, and sure enough, each game was a dogfight.

United defeated rival White Salmon in the second round by a score of 3-1. Johnathon Van Vleck was a part of all three scores. He had one goal and two assists. White Salmon scored the first goal courtesy of Ivan Cortes, a former teammate of Adair Garibay's at the Portland Timbers Academy. The defense played lock down and United caught fire after this. Johnathon Van Vleck tied the game at one off of an assist from Adair Garibay. As halftime drew near, United had more chances but none would go in. A sense of urgency grew inside of each of the United players, and chances were shared until the 68th minute when Gustavo Barragan scored off of a cross from Johnathon Van Vleck. Three minutes later, the duo struck again on an almost identical play to seal the match for United and lock up a state berth.

The district championship came on Saturday, with United facing rival La Center. The Wildcats defeated United last season in the district semifinals 2-1. United refused to face the same fate this time, and shut out La Center 1-0 to snag their first district championship since 1995. Johnathon Van Vleck's header in the 13th minute was the difference in the match. La Center had several chances to knot the game, but keeper Nolan Patching made several one-on-one saves and reflex saves to keep the Wildcats scoreless. The Wildcats had five corner kicks in the final five minutes, all cleared out by the defense. United celebrated with their fans after the final whistle, and took many pictures with family, the local newspapers, and each other. A moment surely never to be forgotten by this program and all involved in it.

Note: By the time the edition will be mailed out, United will have already played University Prep in the first round of state. The WIAA website has updated brackets for all to follow.