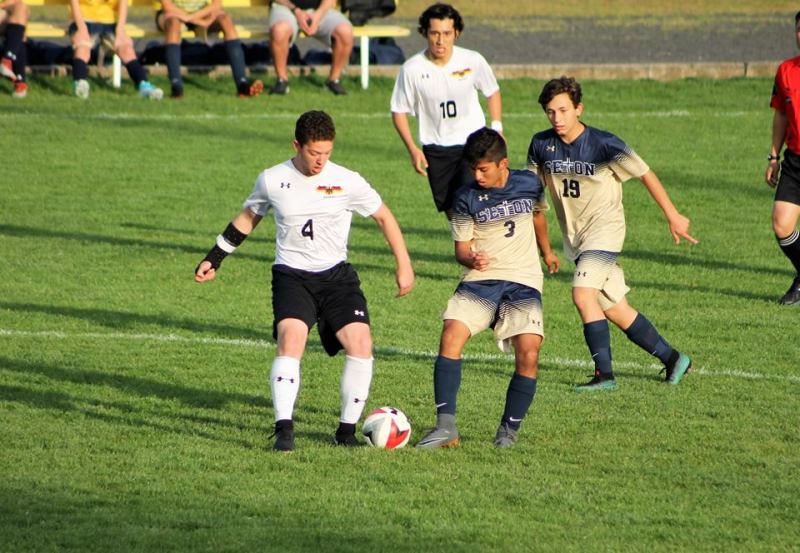 Photo by Tammi Edwards - Senior co-captain Nicholas Patching and Trico Offensive Player of the Year Issac Garibay control the midfield during the final regular season game of 2018 that clinched the Trico League Championship for United.

For all of the recent success and rich history of the United boys soccer program (the combined Winlock and Toledo High School squad), neither the program, nor its head coach, Horst Malunat, had never won a state playoff game, until this year.

In each of the past 4 seasons, United has won either the Trico League Championsip (2015/17/18) or WIAA District IV Championship (2016/17) or both (2017), but always ended up playing the eventual state champion or runner up in the first round of the playoffs. That all ended last week.

On Tuesday, the streak came to an end as United pounded the Colville Indians 4-0 behind a hat trick from junior forward Gustavo Barragan and a shutout effort in goal from classmate Alan Contreras. Junior Andreas Malunat added United's other tally, as well as an assist. United took over the game from the start with midfielders Isaac Garibay and team co-captain Nicholas Patching controlling the midfield for United and center defenders Brian Wood and co-captain Dawson Hall not allowing Colville to threaten Contreras' goal. Barragan opened the scoring in the 10th minute of play on an assist from Malunat. 10 minutes into the second half, Isaac Garibay assisted Barragan on his second goal of the match and Barragan completed the hat trick just nine minutes later on an assist from Isaac Cruz.

Malunat closed out the scoring in the 71st minute on a assist from Patching. United had several chances to make the game even more lopsided as Garibay and Malunat each put a shot off the goal post and Patching sent two shots off the woodwork, and the United attack saw a dozen more shots stop in the hands of the Colville goalkeeper. But the 4 goals were more than enough for United to advance to round 2 of the State Tournament. The win would pit United against 5-time State Champion and current runner-up Wahluke.

The thrill of the first state tournament victory in program history turned into the agony of defeat as United fell on Saturday to Wahluke on the Warrior's home field in Mattawa. Wahluke, a heavy favorite going into the game, imposed their will on a clearly tired and beat up United squad. The combination of a long road trip (Mattawa is about 5 hours from Winlock & Toledo) and four United starters (including three 1st Team All-Conference players) either injured or sick, was too much for the team to overcome. Wahluke advanced to the state semifinals and United saw their season come to an end.

Although the season ended a week earlier than the team had hoped, there is no way to describe the season as anything less than a huge success. United won the Trico League Championship for the third time in four seasons, highlighted by a pair of wins over the team's biggest rival, the La Center Wildcats, 3-2 at La Center and 3-0 in Winlock. That title capped off a 4-year span in which the Senior class of Nicholas Patching, Dawson Hall and Daniel Guijosa won a total of five championships, including at least one title every year. Hall and Patching also accomplished something not seen in at least 60 years at Winlock High School: both athletes were varsity starters and earned letters in all 12 seasons of high school sports (football in the fall, basketball in the winter and soccer in the spring). The team mates, who have played football, basketball and soccer on the same teams dating back to youth soccer 12 years ago, both earned 12 varsity letters, putting them in very select company.

Although graduation means the departure of a pair of stalwarts in the United lineup over the past four seasons and the loss of their two co-captains in Hall and Patching, the squad is still poised for success and will be a heavy favorite to win the Trico League as well as the District IV championship in 2019, bringing back an impressive core of juniors for their senior season, including the 2-time goalkeeper of the year in the league in Contreras and the top two goal scorers from this season in Barragan and Malunat. Garibay will continue to hold down the midfield and the defense will boast three returning starters in Eucario Contreras, Ivan Cibrian and Wood. Those players will be coming back next year will a feeling of some unfinished business.