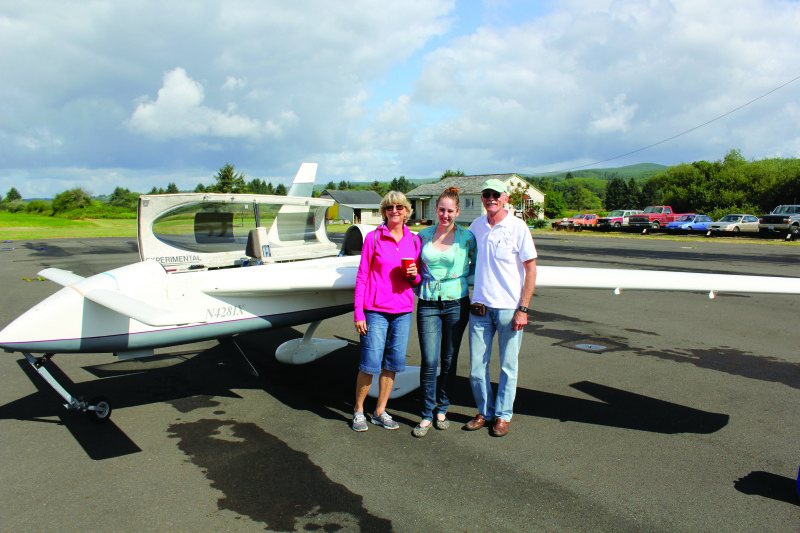 John and Margie Bauer of Prescott, Arizona stand with their niece Katie Howland who met her relatives at the Willapa Harbor Airport during the annual Oyster Fly-in in Raymond. The Bauers arrived in the experimental Long EZ a 1994 "Canard Pusher"

The annual event is growing in popularity between aircraft enthusiasts and the curious community with an oyster dinner available in the hanger at the Harbor Airport.

Willapa Harbor Pilots Association/ EAA Club President Jerry Gould and WHPA member Dave Gauger greeted pilots and co-pilots to the fly-in from 11 am - 3pm on a clear day, a great day for flying.

One couple from Prescott, Arizona took their time arriving to the annual Oyster Fly-In and hit some bad weather along the way.

"We came out of Prescott and stopped in Winnemucca (Nevada), and again in the Dalles Oregon, because of the weather," said John Bauer of his trip with wife and co-pilot Margie.

"We left The Dalles and took the final one hour hop into Raymond."

The Bauers flew in an experimental 1994 Canard Pusher.

With a wing span around 27 feet, the tandem pusher seems tight but for the Bauers, they feel very comfortable with plenty of legroom to stretch out and this was only one of their trips in the single prop airplane.

"I think the longest trip we made, an overnight trip, was to Oshkosh, Wisconsin," noted Bauer.

"It is just like nestling in a cocoon," said Margie Bauer of her backseat.

And if she wants to she can steer the plane while in flight as the rear passenger has a joystick inline with the pilot's controls.

The experimental Canard Pusher looks like it could be a glider with its wide swept wings and long body. Made of composite material the reason it is labeled "Experimental" is that is was made by an individual not by an aircraft manufacturer.

"This does not mean that it is not safe," notes John, "just that it was made by an individual."

John was working with a friend and engineer from Honeywell who had been working on the Rutan Long design. The homemade design was based off a VariEze design which was first introduced to the public for private pilots in 1976. Rutan is noted for his work in the aerospace industry and the SpaceShipOne, the first sub-orbital spaceplane becoming the first privately funded spacecraft to enter the realm of space. Rutan also designed the record-breaking Voyager.

For Bauer, he grew interested in the Rutan design and wanted to build one himself. After attempting to make his own he went ahead and purchased his own Long-EZ craft, which he pilots today. Bauer himself a pilot since 1970 also flew for the Air Force and continued his love of flight with his Conard Pusher.

"I was a little apprehensive at first," said Magie, "But with John's experience and his knowledge, I feel quite comfortable flying with him."

The couple from Prescott also took time to visit family in the Willapa Harbor area and were noted as the plane traveling the longest distant for this year's Fly-In.