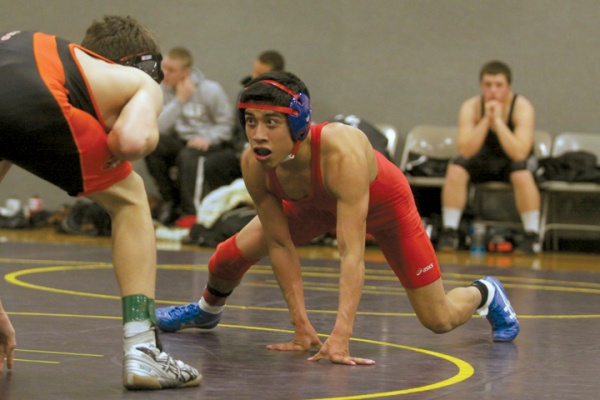 Winlock wrestler Marco Bautista (center) works his patented “monkey walk” during a tournament at Napavine Dec. 19. Bautista won both of his matches and was among many Toledo/Winlock/Onalaska team members to take home a victory that day.

Wrestlers from Toledo, Winlock and Onalaska dominated a meet hosted by Napavine that included athletes from Adna, Napavine, Centralia and WF West.

TWO Wrestling Coach Pat Jones said that three athletes stood out in their performance during the evening. He pointed at Toledo’s Jerome Fehres who split his two matches and Freshman Wyatt Moran from Onalaska. He also was pleased by the two pins by Zack Caldwell who is also from Onalaska.

Another double winner included veteran Winlock wrestler Tony Raupp. Raupp has grown several inches taller in the last year and he says it has helped him in the sport.

"It is different, but I have gotten better," said Raupp. "My longer legs really help me."

Raupp says that he wrestles for a lot of reasons, but he clearly finds the sport therapeutic.

"If you have anger, you can get rid of it," he says. "It is fun to get in there and beat people up."

Toledo’s Coty Jasper is starting his 5th year of wrestling and he also split his matches at Napavine. The Toledo wrestler dominated his first match up until it went really bad, really quick.

"I was ahead 7-0 and he reversed on me," described Jasper, who lost by pin.

He said he wants to make state but that is certainly not his only reason for wrestling.

"I like the friends and the crowd," said Jasper. "It is a fun and competitive sport."

Winlock sophomore Sarah Howsden dropped both her matches but is still looking to learn. When asked how she was doing, Howsden immediately reflected the question to Jones, her coach.

"She certainly listens to her coach," Jones quipped as he departed the conversation to watch one of his 21 TWO wrestlers.

The Toledo/Winlock/Onalaska wrestlers will compete at a tournament at Montesano and then be off until January.