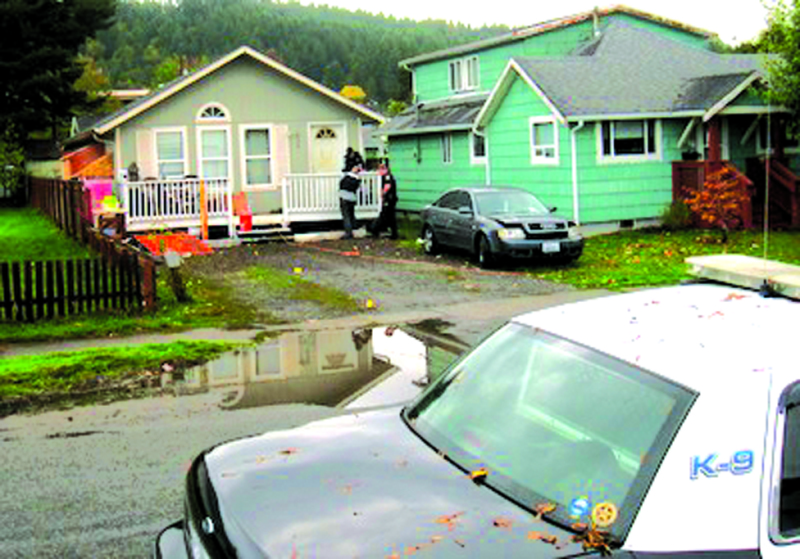 Officers collect evidence from the Chehalis home where the shooting occurred Friday morning.

Police have recovered the handgun they believe was used in a shooting incident on Friday and arrested two people for "aiding and abetting," but are still trying to track down their suspect.

Officers responded to the 600 block of Southwest William Avenue after receiving multiple calls just before 3 a.m. from people who heard four or five gunshots following an argument outside a house.

Nobody was struck and nobody was hurt but one bullet lodged in the railing along the front porch, according to the Chehalis Police Department.

Department spokesperson Linda Bailey said the individual with the gun was outside when the shots were fired.

Several people reside at the house in question, but Bailey said she doesn't know how many of them were home at the time. The suspect and victim or victims were acquaintances, she said.

Bailey indicated she didn't have information about a motive.

Next door neighbor Sharon Edwards said she didn't know what was going on, but stayed put after hearing gunfire.
"I didn't get up, I was frozen on the couch," Edwards said.

When daylight came, she saw detectives outside, placing as many as 10 yellow markers, she said.

Officers recovered only the one round, according to Bailey.

The suspect police are looking for is 36-year-old Andrew C. Skyberg, His whereabouts are unknown, according to the police department.

Bailey said she didn't know where the .380 handgun was found, but it had recently been stolen in a vehicle prowl.

Arrested for aiding and abetting and booked into the Lewis County Jail are Bryan K. Butts, 32, from Cinebar and Felicia D. Lane, 28, of Chehalis, according to the police department. Bailey had no specific details about whatever help they are alleged to have provided.

Skyberg is described as a white male with very short hair, 5-feet 10-inches tall and weighing 175 pounds. He has tattoos on both arms.