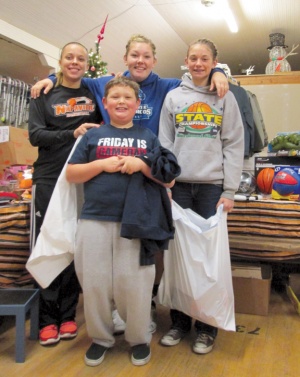 Toys from a host of generous donors were given to area children from the Toledo Food Bank Friday in addition to regular giveaways.

Multiple local businesses and community organizations were involved with donations, including Toledo Middle School’s Students Against Destructive Decisions (SADD), who featured a fundraiser and shopping trip. The Elementary School also held a Toy Drive contest to help contribute to the giveaways.

Drop-off boxes around Toledo were filled throughout last week with early estimates stating 2012 donations beat last year’s of around 380 toys. This Gift Event began more than 10 years ago and is met with more smiles and thanks every year. New this year was a special Saturday shopping day for children to pick out gifts for their parents and grandparents.

Toledo’s Food bank is open the second and fourth Fridays of the month, with additional days during November and December, targeting families within the Toledo School District. A family ranges from 1-6 or more, typically 3 people, with the number of families served averaging 175 monthly, though closer to 200 during the holidays.

Starting as a high school project in 1987 by Sean Fox, Toledo’s Food Bank has evolved into a team of 15 regular volunteers, plus holiday extras. Organizers have since joined a coalition of area food banks to ensure families are best served.

No personal information is saved, only noted to track the number of families served each month. Area retail businesses sponsor freezer goods and personal items to supplement fresh produce and nonperishable foods.

While demographics indicate an overall population decline from more than 1,300 since 2010 within the 98591 zip code, demand has increased. Especially appreciated are donations of infant formula, diapers, and pet food. Yes, pet food. Those in immediate need can contact Toledo City Hall Monday through Thursday at (360) 864-4564 during business hours.