Toledo third-grader Daphnie Bybee (left) takes a closer look at a robotic arm built by seventh-graders Chandler Roe (right) and Dawson Moreil (not pictured) during a presentation by Toledo Middle School Robotics students at the School District Board meeting Dec. 19.

Students from Toledo Middle School showed how they could sort, arrange, launch and motorize all sorts of objects using robots in a presentation to the District Board Dec. 19.

Led by science teacher Sherrill Stead, the students have been working this past term on how to use robots for industrial, commercial and even military applications, much of which has been made possible through a $25,000 OSPI grant acquired at the beginning of the school year. The funding was used to acquire robotics kits and laptops for the class, so now two or three students can work on a project at a time rather than five or six, like before.

Student presenters showed an array of robots that night, from conventional armatures used for manipulating nearby objects, to a catapult, a color-sensitive block-sorter divvying out colored blocks into beakers, and a gyroscopically-supported, two-wheeled vehicle, which had been programmed to avoid obstacles and keep from being knocked over.

Stead said much of the function of the robots had been left up to students, and the curriculum itself has been designed to take place with student initiative and little instructor interference.

One student, Caleb Atkins, said he had found the most challenging part of using a robot was identifying and correcting programming errors, while Rylan Richardson said her team found difficulty in adjusting small pieces in cramped areas without compromising the rest of the robot.

Students had also made a public presentation earlier that week on Dec. 17 during a robotics fair at the Middle School, and Stead said such fairs are expected to continue as the program enters Winter terms with a new set of students. 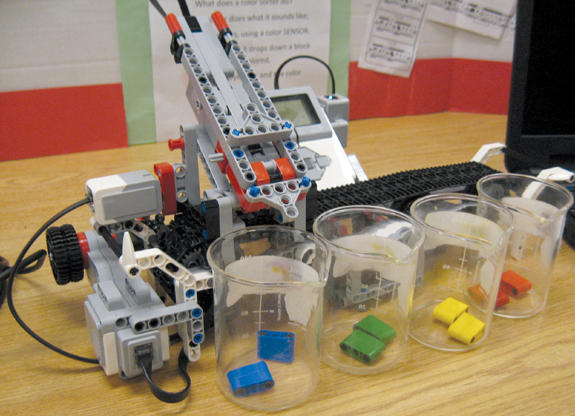 A sorting robot built by Kyra Covington, Rylan Richardson and Haley Huckbee, which they programmed to separate a stack of small blocks into beakers by color. 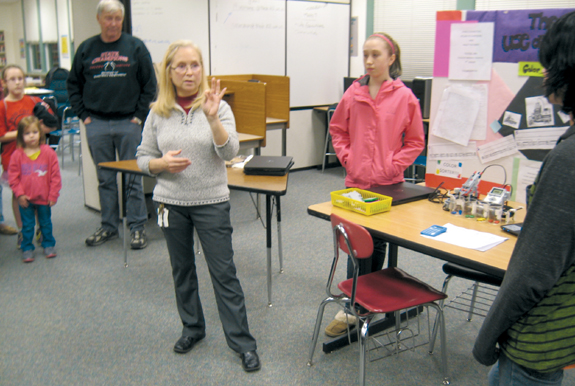 Instructor Sherrill Stead (center) explains to district officials how students have employed problem-solving and engineering skills while using many kinds of robots.