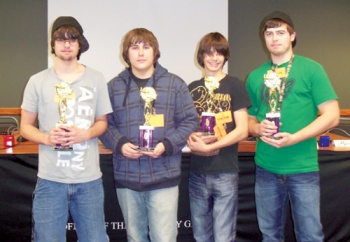 Toledo High School students in the Family and Consumer Science class took the opportunity to compete in a “Life Smarts” competition held in Tumwater on Feb. 11.

The team of Ryan Reed, Kyle Pellitier, Ronnie Boone and Alex Palermo took first place after five rounds of competition. The students answered questions on a variety of consumer issues during the contest.

"I found it helpful to pay close attention to each person's strengths and weaknesses," said Reed of the strategic importance of order. "We could determine where to sit to get the highest score."

"One of the many things I learned was that in order for us to succeed we had to prepare for the competition," said Pellitier. “My teammate and I sat down one week before the meet and went over everything we had learned about a certain topic and shared it with each other."

The team now has the opportunity to attend National competition in Atlanta, Ga., the end of April.

"Some funds are available for students to travel, so we just have to hope that we can come up with the rest," said Rene Ketchum, the group’s advisor and teacher at Toledo High School. Pelliter is also hopeful for a successful trip to Atlanta for the national competition.

"I'm in it to learn things that I'll need to know later on in life after high school," he said.

Students learn valuable life skills in this competition and the Washington State Credit Union treated the students with continental breakfast, lunch, treats, and a great experience.

"The food was awesome," said Ronnie Boone. "I actually learned a lot that i didn't know before."
Read more from:
TC - Community News
Tags:
None
Share: