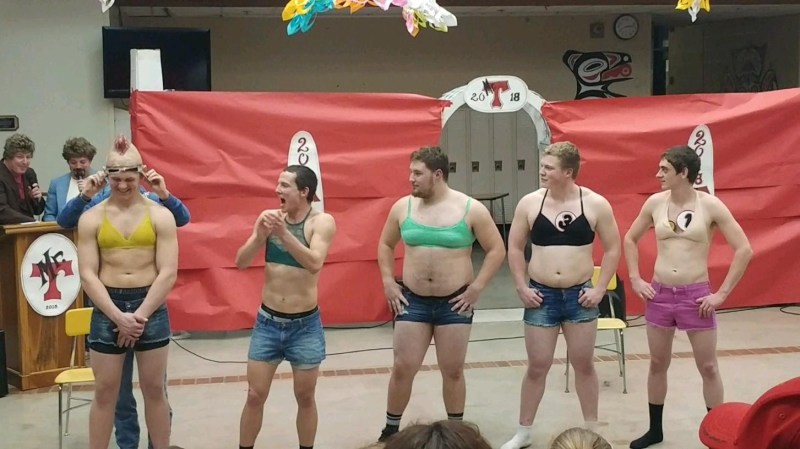 Anyone is welcome to watch the pageant and support the boys. The contestants this year were Hunter Grove, Kyle Hawkins, Tyler Robinette, Reece Wallace, and TJ Nef. The contestants wardrobe helpers were Shareace Miller, Tiana Berg, Meeghan Peters, Abby Rowe, Ashlyn Rustan, and Shy-anne Hill. The judges were Mr. Huffman, Mrs. Gale, Miss Welch, and the 2017 Mr. T, Austin Finley. The boys opened up the show with a dancing act in tutus.

The first event was Atrocious Beachwear. Each senior showed the crowd their choice of swimsuits. The second event was Talents and Skills. Hunter Grove was a mathematical genius who wanted to get a job with Vader ade. Kyle Hawkins showed off his brass playing, which he played upside down. Tyler Robinette's skill was bodybuilding. He attempted to lift a bar with a teddy bear at each end. Reece Wallace's talent was ice fishing with a plastic bowl and some suggestive advice. TJ Nef was rodeo bait. He played a violin and danced around the room. The third and last event was Personality. Each boy got to answer a question by Gaul and Malunat.

Hunter's Question: What is your most treasured memory at Toledo high school?
Answer: Three days ago he wrote three whole words in class. His future career plan is to be a firefighter in Montana.

Kyle's Question: If you were to win the lottery tomorrow, what would you do with the money and why?
Answer: He would make Vader great again. His future plans are in politics, he would like to be the mayor of Vader.

Tyler's Question: If you woke up to find yourself the last person on Earth, what would you do and why?
Answer: He would never wear clothes again, find all the Twinkies, and make the gym his personal gym. His future plans are to eat jelly filled doughnuts for the rest of his life.

Reece's Question: Who do you look up to the most, and why?
Answer: Mr. Huffman, who taught him everything he knows about "fishing." He wants to dribble his way out of Toledo and shoot for a great job.

Tj's Question: What makes you blush, and why?
Answer: A horse in Vader. He'll go to Stanford, Harvard, Princeton, or Centralia College and major in Sports Medicine.