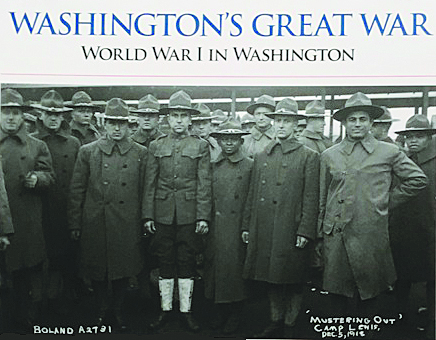 Don Bremmer, President of the Toledo Historical Society, stated, "It is happening because we perceived it to be an event of historical significance and we are doing it in conjunction with the Washington State Historical Society. It started because member Johanna Jones first heard about the project in November 2017 and contacted the Washington State Historical Society. I was then contacted by Statewide Heritage Outreach Director by email on December 7, 2017 and asked if we would be interested. It is a free World War I exhibit they have for museums and historical societies."

Photos were acquired through the Lewis County Historical Society. Chip Duncan, from the Veterans Museum, will be a guest speaker and do a slide presentation.

Brenner stated "Since the beginning, we have acquired WWI artifacts from members and elsewhere to expand the scope of the program. We will have more WWI photos, WWI Army and Navy uniforms and a WWI canteen and gas mask. We will also play music from the era."

"We are honoring those who were in WWI. We should never forget the tragedy of the Great War and its impact on those who served and those who were left behind. Every soldier or sailor who lost a life or a limb is an individual tragedy but collectively even a greater tragedy," continued Brenner.

This is an opportunity for old and young alike to enjoy the history of our country, state and county. This is the centennial year of the end of WWI. Let us never forget those who served and who have gone on before us.