Toledo has Little Trouble with Montesano in District IV Playoffs 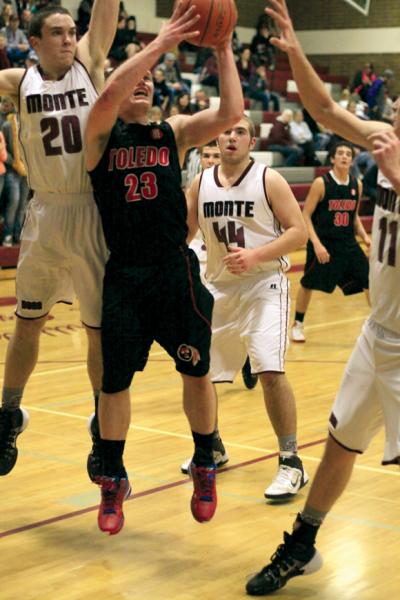 Toledo High School athlete Grant McEwen (#23) grabs one of his 15 rebounds during a victory over Montesano on Feb. 11.

The Toledo boys basketball team advanced in the District IV Tournament with a lop-sided win over Montesano on their home floor Feb 11.

While Brent Wood and Grant McEwen broke into double figures in scoring, Toledo Coach Scott Merzoian insists that it is their defense that won this game and many others.

“We can have bad shooting nights but we got to have great defense,” explained Merzoian.

The Indians shocked the Bulldogs and their fans by jumping to a 17 to six lead, but then Monte roared back and climbed to within eight a few minutes into the second quarter.

“They cut it to eight and we stole the ball two or three times for lay-ins and that took our lead back to 12 or 14 points,” said Merzoian. “It was a big difference in the game.”

The coach was vocal about just a small lapse.

“We got that lead and our mentality changed got a little comfortable and we kind of had a little bit of a letdown,” he said.

“Coach was really getting after us to play our best defensive game of the year,” he said.

It was Wood who poured it on the Bulldogs in the first half with five three pointers despite a clear defensive plan to keep a defender in his face at all times. Wood finished with 21 points.

McEwen was his usual workhorse-self with 14 points, 15 rebounds, seven steals and four assists in a yeoman effort.

“I think we responded pretty good,” said Wood of his team’s reaction to playing an unfamiliar team on their home floor. “They were pressing us trying to speed the game up. We slowed it down after a few turnovers.”

The Bulldogs changed their strategy after Wood found holes in their defense.

“We were able to get a few threes out of their zone,” he said.

Editor's note: due to an early deadline, Toledo's match-up with Kalama will see coverage in the next edition of Town Crier, but look online for more timely information.