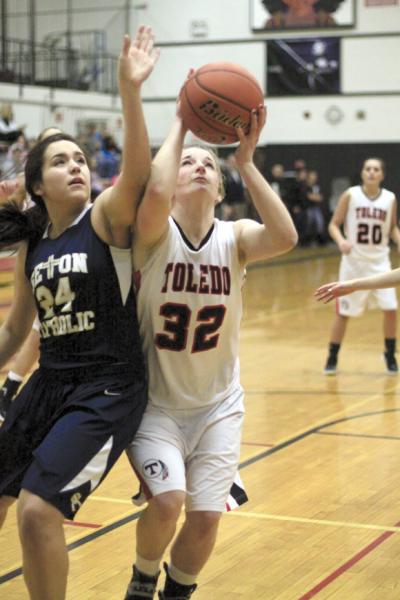 Don't look now, but the Toledo Girls Basketball team have made themselves into a contender. Coach J.B. Ewers and the Lady Indians have righted the ship with a pair of Trico League wins this week over Seton Catholic and King's Way Christian.

It started quickly Jan. 21 as Casee and Chaselin Rice scored all 16 points for Toledo with jumpers from a variety of angles and distances.

“I think my team made it more effective for me to take and get more shots,” said Casee Rice, who scored 21 points in the game against Seton Catholic. “They did their jobs running our offensive plays and try did their jobs well.”

“The first and third quarter were good and then we kind of had the letdowns,” said Ewers.   “That has been our thing. Usually we have had bad stars, and got ourselves in holes that we can't get out of.”

This week there were no holes, only dominance. The Lady Indians took a 16-5 first quarter lead and then held on to a 25-15 advantage at halftime before extending to a 15-point lead after three quarters.

While the Rice sisters claimed the bulk of the points, Ewers has schemed to battle with the big and tall line-ups in the Trico League, including Seton Catholic that had three players over six feet.

“We have been trying to use more of a bigger line-up at times because our league has a lot of big kids,” explained Ewers. “It has been really important to have kids that can defend other teams post players so we have been trying to come up with ways to play four posts at a time and different things like that.”

Enter the bench of bigs and wanna-be-bigs for Toledo. Denacia Oberg and Karlee Coverdell are the go to defenders of the paint, but add the play and rebounding off the bench of Haley Tauscher and Emily Barge and depth begins to stack up.

Barge unleashed a team leading 11 points on Friday night against King's Way when six of her teammates scored at least a half dozen points.

In the meantime, the front court is improving as well. Victoria Tjemsland and Kenzee Harlan are the front court generals, but one scary moment on Tuesday found Courtney Moore coming in off the bench to play significant minutes.

In a friendly fire incident, both Harlan and Emily Barge went after a long down court pass. Barge undercut Harlan and sent her into a horrific freefall. Harlan ended up being carried off the floor after several nearly silent minutes in the THS gym.

Despite the severe appearance, Harlan was back in action on Friday night against King's Way.

"It was my ankle. Probably a sprain but this happened to my right ankle in soccer,” said Harlan. “I finished the season and played through the pain. I plan to do the same now.”

The incident certainly heightened to concern for Ewers.

"She is kind of the engine that makes us go,” said Ewers. “When she plays well, the whole team plays well. It makes you nervous when she goes down. She is a vital part and usually she doesn't come out of the game. That was probably a mistake I made tonight leaving her in there too long at the end.”

After two wins, the Lady Indians have to look at the developing playoff picture ahead of them. They are currently tied for 5th place in the Trico League and the top six advance.

“Not only have we made ourselves proud but we have made our coaches proud too,” said Chaselin Rice who added 11 points and six rebounds against Seton Catholic. “The team is improving so much, we have not only became better individuals but we have became better as a team too and that's all it took. We knew we had to start playing as a team if we wanted to have a better season and that's what we did. I think we can do anything we set our minds to, if we want to make it through districts and we believe in ourselves and in our teammates i think we can do it.”

With trips to Kalama, and Ilwaco and then two huge games at home against Stevenson and Castle Rock the Lady Indians must manage their remaining schedule successfully.

“We know this is our time and we are ready to step up and make it happen,” said Casee Rice. “We are ready to do what we know we can.”