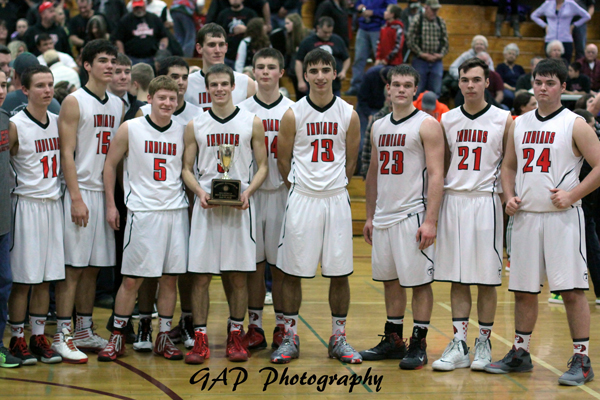 There is no more difficult small-school basketball district tournament than that of District IV, or Southwest Washington, with 16 teams including two unbeatens at the start of the post-season foray.

The Toledo boys basketball team navigated three rounds of the tournament before falling as the 51st consecutive victim to Morton/White Pass in a 67-62 double overtime thriller at W.F. West High School on Saturday night.

In round three, the Indians dropped previously-undefeated Life Christian Academy 34-32 in Tumwater. Toledo jumped to a 17-4 lead at the end of the first quarter, but struggled to score 17 more points in three more quarters in a defensive gem.

"Life (Christian) is a good team, and we were the underdogs," said Toledo Head Coach Grady Fallon. "We really didn't have anything to lose. They were the ones with the undefeated season at stake. I was proud of our guys efforts and execution, especially in the second half."

Grant McEwen led the Indians with 11 points, but defense was certainly the name of the game. Brent Wood chipped in nine points, most early, so the main contribution of him McEwen and Forrest Wallace was defense. Gabe Fuentes, Joe Wallace and Riley Bowen were all big parts of the win with their constant harassment of the Eagle ball handlers. Donevin Merely played additional minutes in order to be a defensive presence on the LC big man Luke Grocott. In the end, the Toledo defense, held a team that averages 63.5 points per game to just 32.

That is the kind of competition Morton/White Pass presented in the District IV 2B Championship game on Saturday night. Winners of 51 straight games including two over Toledo this season, defending state champions and conquerors of all recent competition the Timberwolves were going to be a formidable force.

"We put ourselves in a hole in the first quarter, but fortunately we battled back," said Fallon. "That was a great game versus a great team. They will be remembered for a while, and we are the ones to nearly beat them twice."

MWP came out hot. They threatened to bury the Indians in short order, but Toledo played even in the second and then allowed the Wolves just a single point in the third quarter and showed signs of putting the game away until about three minutes left in the 4th quarter. MWP tied the game and their depth forced two overtimes and Toledo just ran out of gas and resources.

"I feel as if we didn't make as many mistakes and that being the case, we were able to pull through," said senior Forrest Wallace of the Life Christian game. "Everyone stepped up at the right time in both games, it's just those little things we gotta improve on to become better they're both great ball clubs and now that we've got that 3rd loss against MWP I think it's going to help us refocus and comeback even stronger!"

"This team has had a state trophy as a goal from the beginning of the year, and now were a couple wins away from that goal," reminded Fallon. "I'm very proud of the work that these guys have put in this season."

The Indians now will proceed as the number two seed from District IV and drew Walla Walla Academy as their first-round opponent in a Saturday match 8 p.m. at Tumwater High School.