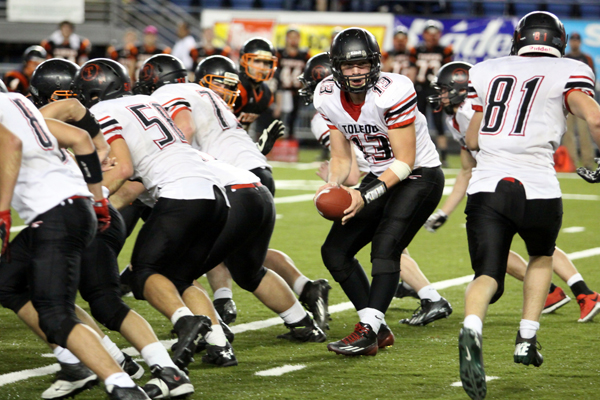 Indian QB Dalton Yoder prepares to hand the ball to Dakota Robins (#81) during the WIAA State semi-final game against Napavine in the Tacoma Dome on Friday.

Few can say that the final outcome was unexpected, but many were surprised the way the WIAA semi-final between Napavine and Toledo played out last Friday.

The Tigers of Napavine were big favorites--undefeated and playing the Indians for the second time this season. Tiger fans had to be confident after a dominating 36-6 result back in October. Toledo played great football during the re-match on Friday, but in the end fell to the Tigers by a score of 28-22.

"They didn't make any mistakes today, or not that many," said Napavine Head Coach Josh Fey. "I thought we would wear them down and we didn't. I thought our depth wore them down. They had a lot of kids playing both ways. They played well. They played well enough to win today."

True, Napavine dominated the game in many ways totaling 346 yards (compared to 173 for Toledo) of total offense. During the first half, they drove the ball up and down the field almost at will, but struggled to find the end zone. The teams punched and counter punched until Napavine scored the first blow with a long drive followed by a 7 yard connection between QB Wyatt Stanley and Mac Fagerness with 10:24 in the second quarter.

Then Toledo figured out how to stay in the game: Big plays.

The initial answer was a 77-yard kick-off return by Dakota Robins on the ensuing possession.

Robins spent much of the week feeling pretty wimpy.

"I told him before the game to drink lots of water cause I was going to need a huge play from him," said Toledo Head Coach Jeremy Thibault. "Boy did he deliver! Very important kickoff return for a TD!"

Napavine answered with a short drive and another Stanley to Fagerness hook-up just before halftime.

"Our only halftime adjustments were to reinforce confidence in our players and their ability," said coach Thibault. "We told our line they can block them, it's not easy but that they were capable of doing it. We only ran nine plays in the [first] half and obviously we weren't going to be successful unless we had the ball longer."

Toledo came out with a healthy dose of Taylor Hicks and the Indians began to play even with the powerful Napavine front. Hicks ran for just one yard in the first half, but rumbled for 72 yards in the second.

Like the Tigers, Toledo found success with the passing game. Most dramatically, Dalton Yoder found Grant McEwen for a 56 yard TD pass and then a couple of possessions later, Yoder found McEwen in the end zone from 16 yards out and Toledo took a precarious 20-14 lead after the PAT kick by Bryan Osborne was blocked.

Three minutes later, the Tigers answered the Indian sucker-punch with a 53-yard drive of their own completed by a 29 yard short pass from Stanley to Sam Faggerness who ran 29 yards to pay dirt. Napavine converted the PAT and took a one-point lead with 5:39 to go.

The Indians were not able to do anything offensively on the next possession so the Tigers set about killing the clock. Facing a 4th and short. QB Stanley found Cole Doughty wide open when his defender fell down and completed a long TD pass of 56 yards when the entire world was thinking Tiger short yardage power.

Toledo was awarded two additional points as the Tigers backed into their own end zone allowing a safety to run out the clock in rather ironic fashion.

So ended one of the most exciting football games of the year and it was on the big stage in the Tacoma Dome. Napavine is still undefeated and will return to Tacoma this Friday to face Okanogan for the WIAA State Championship.

"I am really excited for these kids and have the opportunity to get back in the state championship game is outstanding," said the Napavine Coach Fey. "These kids have earned it. They have worked hard all year."

Toledo finished their season 10-2, with their two losses to the top-ranked Tigers. The Indians will be awarded the WIAA third place trophy based on a scoring formula.

"I was so impressed with the community support and showing at the Tacoma Dome," said Toledo Coach Thibault. "I told our kids we will be back next year and enjoy their time off but we will start lifting again soon!" 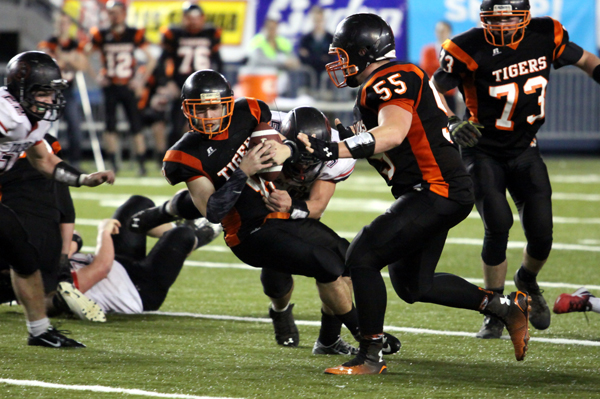 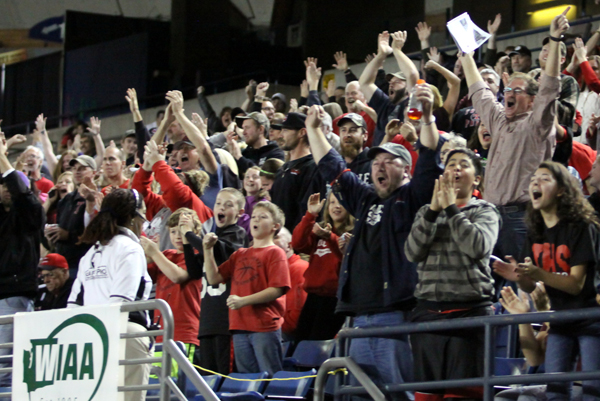 Toledo fans are ecstatic after Dalton Yoder hit Grant McEwen for a 56-yard TD pass to tie the game 14-14 in the second half. 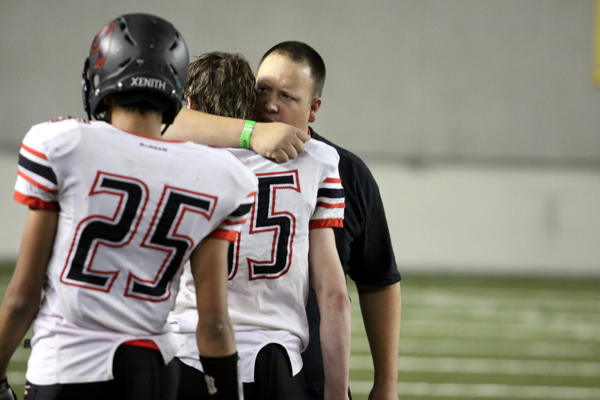