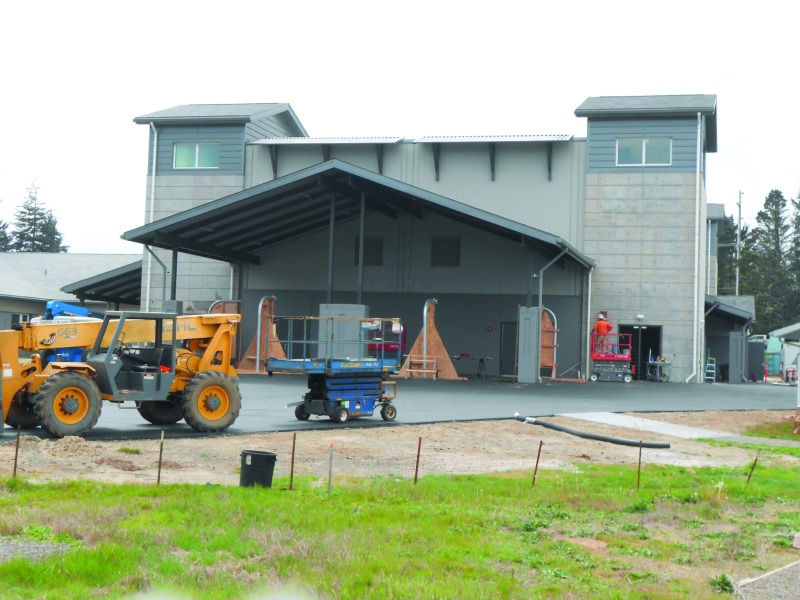 Photo courtesy of the Ocosta Elementary Student Council - The new earthquake and tsunami proof elementary in construction with equipment for scale.

Whether we're prepared for it or not scientists have recently determined there is roughly a 37% chance of a major earthquake and accompanying tsunami occurring off the coast of the Pacific Northwest within the next five decades. How would this be possible one might ask? Well as it turns out the beauty of the Pacific Ocean is hiding a deep and dark secret right off the coastal shores.

Dubbed the "Cascadia Subduction Zone", a 620-mile-long fault line lies positioned directly off the coast of British Columbia, Washington, Oregon, and Northern California. The zone marks the separation between the strait of Juan de Fuca and the North American tectonic plates and has historically produced earthquakes with a magnitude exceeding 9.0 Should such a quake occur in our lifetimes it is estimated that the damage caused by such an event would be so immense that it would fundamentally reshape the entire coastline Pacific Northwest and would leave tens of thousands stranded and or deceased.

So what could anyone do to prevent such a catastrophe? Stopping an earthquake from happening is certainly beyond our current scientific understanding, however, there is much that can be done to prevent the loss of life during such an event. In light of this looming threat the Ocosta School District embarked on an engineering project, the likes of which has never before been attempted in all of North America.

Following the recommendation of Project Safe Haven, a grassroots and community driven study to develop safety plans for coastal regions in the Pacific Northwest, the Ocosta School District and surrounding community members decided to fund and build what is known as a "vertical evacuation center" directly into their school as an extension to the gym. The evacuation center has been constructed to structurally and safely withstand a whopping 9.1 magnitude earthquake and has walls which tower approximately 55 feet above sea level. Although not designed for extended use periods, the shelter can house well over 1,000 people on its roof and remains an open use refuge in case of emergency to community members as well as Ocosta students and staff.

If a major earthquake were to occur, it is estimated that residents in the area would have approximately 15 to 30 minutes to get on the roof before the ensuing tsunami would surge onto land destroying nearly everything in its wake.

This past Saturday at 11:00 am a ribbon cutting ceremony was held to christen the structure as "ready for use", thus providing peace of mind to parents, students, and community members alike. The structure is the first of its kind to be built in all of North America and the hope is other coastal communities will look to the elementary as a testament to what is possible when people work together for the benefit of all. We may never experience a Cascadia Subduction Zone earthquake in our lifetime but residents of nearby towns might find it a little easier to sleep at night knowing there is a readily accessible structure prepared for use that is for all intents and purposes earthquake and tsunami proof.