The Little Crane Cafe gives a bite of history 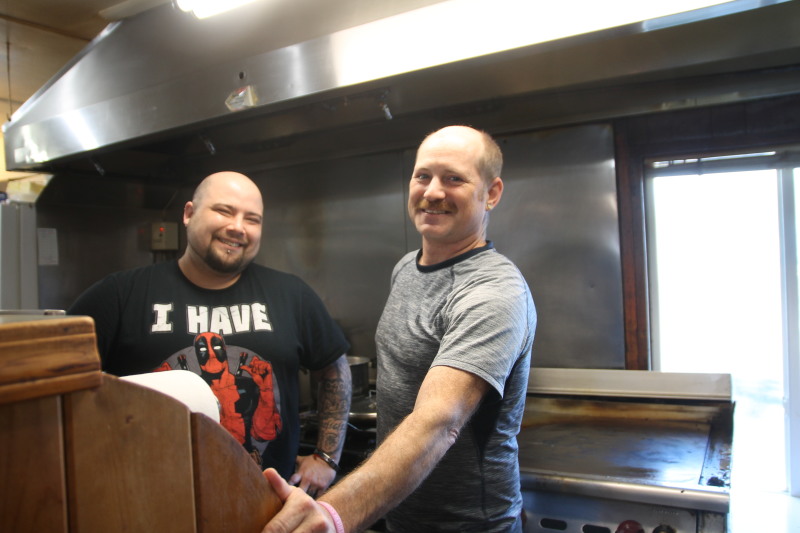 Damian Dazo (left) and Jason Dailey (right) cooking up a storm at the Little Crane!

Little Crane Café in Vader isn't just a local hangout with awesome food, it's a place that many consider an institution. Jason Dailey operates Little Crane for his family. Customers come from all around to eat a meal and to enjoy the atmosphere.

Jason's parents, John and Ginny Dailey, purchased the restaurant with Ginny's sister in 1988. The Dailey's bought out Ginny's sister in the early 90's. Jason said, "my mom had always wanted a restaurant. She was working at Longview Fibre Mill and she saw this as a way to get out of the woods." The family has owned and operated Little Crane ever since. They also own J&G Grocery, which is located behind Little Crane Cafe.

Jason stated, "the Little Crane has been around since the 1950's and it is still serving the same comfort country food to this day." They recently changed the interior with new flooring, tables and chairs but the food quality and atmosphere has remained the same.

When one speaks about the atmosphere at Little Crane, they always mention the singing cook. Per Jason, "it's the atmosphere here that people love. They enjoy the country feel, the servers and the musical talents of the cook. People like to be around happy people. We have the most giggling servers around. Our servers love to interact with our customers. The customers get harassed when they walk in the door and a cup of coffee when they sit down," continued Jason. If you have been to the Little Crane, you know the atmosphere is one of the best things there. And who is the talented singing cook? Yes, that's Jason himself!

Little Crane also houses a lot of history. There are pictures on the walls of the three t's, trains, trees and tools dating back decades. You can always find something new about Vader, formerly named Little Falls, and Ryderwood when you go there. Little Crane is the best seat in town for watching the trains pass as it sits right beside the railroad tracks.

Jason enjoys his customers. He stated, "customers have made this restaurant what it is today. Our customers and our fast moving employees make it work." If you haven't been a customer of the Little Crane you owe it to yourself to enjoy this wonderful restaurant. They have a large menu and serve prime rib on Friday and Saturday nights starting at 4:00 p.m. Stop by and sing a tune with the cook. Entertainment is always free!