The Big Toledo Meeting looks forward to a great year 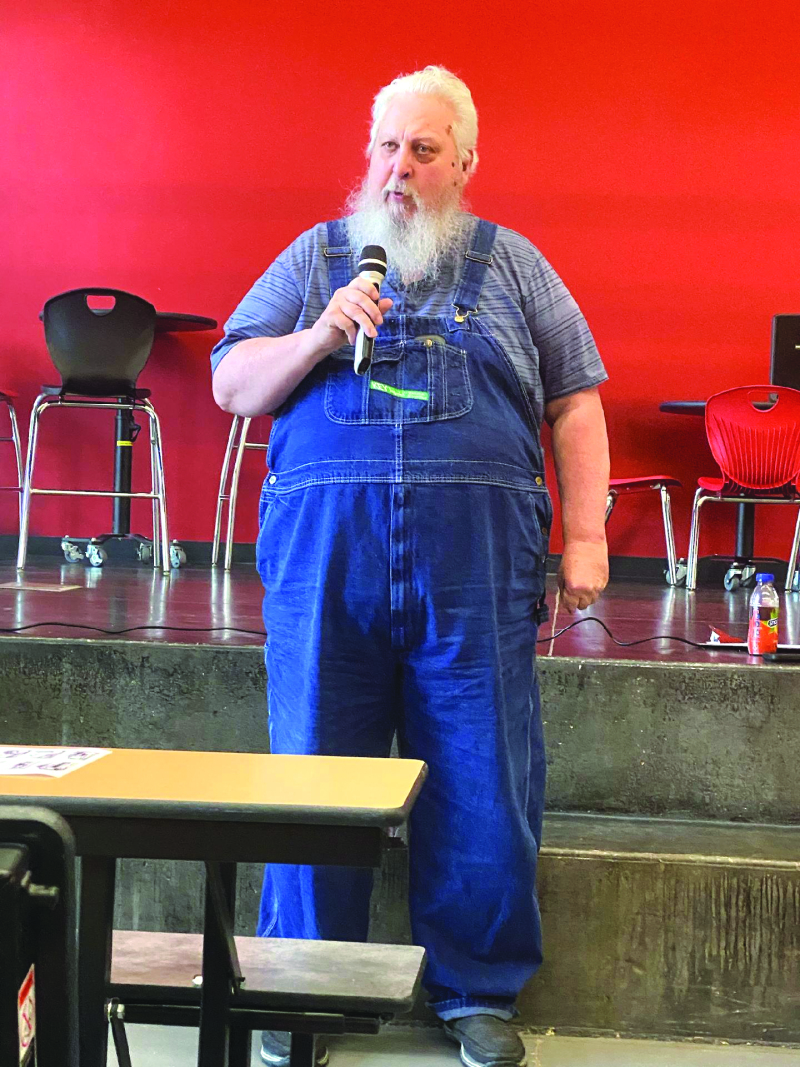 Thursday night, May 12, was the Annual Big Toledo Meeting at the Toledo High School Commons. This is an event where every volunteer group has an update as to what they are doing and what the citizens can expect to see. The most amazing part is, there are several groups. There is a group for just about everything. If you live in Toledo, you can do just about anything and others will help. Toledo has a real sense of what a community is and what a community should be.

This is a recap, there was so much that occurred that evening that not everything can be written.

The City of Toledo employee Shelly Allen spoke of the park survey. There is a park survey that is very important for the citizens to complete. It will assist with grants for the parks. If you have not retired yours, please do.

Mayor Steve Dobosh is always on top of things. He talked about grant money, new housing and cleaning up the trees and applying beauty bark. He also mentioned that growth is coming as they expected.

Pat Caldwell with the Toledo Community Library, reminded the community of the Timberland Regional Library Kiosk, it's a great way to get books that are not available at the Library. They also have the Reptile Man coming and extended hours starting in July. Also, free internet for those who need it.

Don Brenner talked about the items that were available at the Toledo Historical Society and when it began in 2004.

Amber Buck, Toledo Neighbors Program spoke of the community food program, they are there to help people with food insecurities. Many in the community help others with items that they have grown. This is great for people in the area.

Chris Rust, Superintendent gave the best news of the evening. Toledo High School remodel had an excess funds of $1.75 million. What this means to the citizens of Toledo is no school property taxes for 4 years! I think that is a huge bonus for each citizen living in the school district.

Tessie Johnson from the Toledo Senior Center was excited for the Father Daughter Dance, which was a huge success!! She also mentioned breakfast 2nd Saturday of the month and Cheese Day breakfast.

Toledo Community Foundation is a non-profit, Brandie Devine spoke for their group. They assist the community in raising funds to support the students. They have the annual shindig, Toast of Toledo raffle tickets. Their role is to take the burden off of the community and with $40,000 raised, I would say they are doing a fabulous job.

The South County Chamber, John Novak was there, the group of Toledo businesses started it up with the understanding there will be a huge change in our area over the next 3-5 years.

Brian Dennis from Common Ground spoke about replacing the old beds and installing beauty around the old jail.

The forest service explained that Johnson Ridge will not open until June 6, later than most years. The biggest change is, you can walk the trails and you can bring your dog as long as they are on the leash. If you are walking for an extended trip, he recommended that you bring additional water for your fur baby.

The Giant Cheese Ball Drop has been postponed for too long. Mayor Dobosh said this will occur this year on the 4th of July at Midnight. Make sure you get there on the 3rd though, because they are always on time. Be there by 11:58 p.m.

The Bluegrass Festival is on again this year, many great bands are coming.

Shelly from City Hall mentioned the Esther Borte Walk in the park will be on September 24.

Art Trails will be open for two weeks in August. This is a fabulous way to see local artists' studios and their work. Di Morgan has information on this.

Mayor Dobosh talked about the local events, such as the Santa Quad parade.

Carol Berch with the market discussed there are 22 vendors this year. If you have never been to the Toledo Thursday Market, please give it a shot.

Jo Jones discussed that the American Mountain Men were looking at the area. This is a proposed re-enactment

Jake Dailey, Brian Daily, and Camp Singing Wind have some unbelievable renewable resources going on. There is a new role as well, they rake the forest As many of you know forest fires are fueled by wood and other elements on the forest floor. In order to help minimize the effects of the forest fire, they will come to your forest and help you clean it up. What a great way to help the community!

Robert with the Cowlitz Tribe stated they are still working on the Conservancy Project and that Jeremiah Wallace is now an employee of the tribe working with him.

Sharon Layton and Laura Cohen discussed the biosludge. Laura has been pricing the char process and the money needed is less than $5 million to start one locally. Maybe the legislatures will get involved and help remove biosludge from the soil.

Larry Davidson is back in the area, he is a graduate of Toledo. He is working on water issues, one of the benefits is tracking what is in the Cowlitz River. Hopefully a grant will be given to find this information out and to keep the Cowlitz River pristine.

If you live in Toledo, you see all the individuals involved to keep the Toledo area beautiful and together. The town of Toledo has always had a lot of pride, they want their community to be friendly, welcoming and individuals to work together for the betterment of the communities.