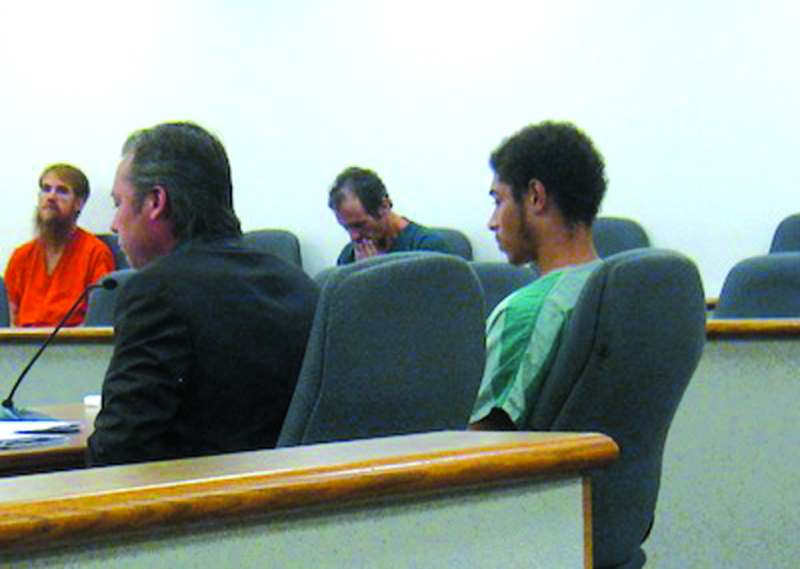 Deshaud Cummings and his attorney in Lewis County Superior Court.

The teenager who stole a police chief's car, knocking down a trooper as he drove away, and finally caught in the woods off Interstate 5 has recently been handed a 29-month sentence.

Dashaud D. Cummings, 17, was charged in adult court for the events of Aug. 10 that began with a pursuit down Interstate 5 that saw speeds of 100 mph before reaching a golf course in Chehalis where Cummings climbed into the Chehalis chief's car while law enforcement officers looked for him, according to prosecutors.

After striking the trooper as he backed up, Cummings drove north on Interstate 5, hitting two cars along the way and finally ditching the unmarked patrol car on the side of the roadway.

"There was no reason for it," Lewis County Senior Deputy Prosecutor Will Halstead told the judge.

The Lacey resident pleaded guilty as charged, to second-degree assault, attempting to elude, and theft of a motor vehicle, as well as hit and run.

The trooper was hospitalized with non-life threatening injuries, having been hit with the side of the car because its wheels were turned and landing on his hands and knee, according to authorities.

A plea deal was struck in which both sides would recommend Cummings get the top of the standard sentencing range and pay restitution for all the damage he caused, whether or not it was charged, according to Halstead.

Defense attorney David Brown noted to the judge his client has been respectful and wants to make some changes.

Cummings' family members sat behind him in the courtroom in Lewis County Superior Court in Chehalis.

"I would encourage you when you get out to do things differently," Lawler said. "You've got people here supporting you, but that's not going to go on forever."

He alluded to some defendants who eventually end up in criminal court alone. "Family can only take so much." the judge noted.