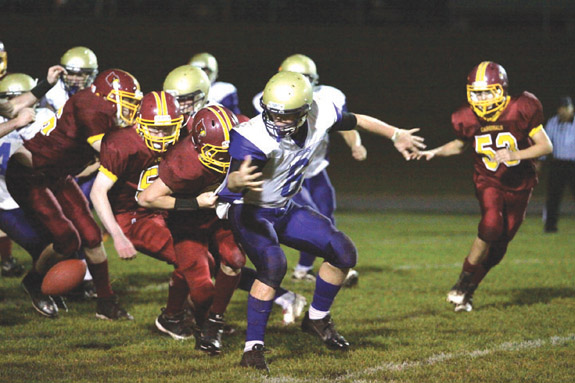 Castle Rock took care of business at home on senior night during a 1A Trico League match-up. With Homecoming in the air, Castle Rock scored six touchdowns in a variety of ways. QB Mason Klingberg ran for two touchdowns and passed for one. In all, he passed for 52 yards, and carried the ball for 125 yards. Shawn Godinho was the recipient of one of Klingberg’s passes for a touchdown. Zac Akesson ran back a kickoff for a score and workman Nate Williamson scored the opening TD for the Rockets and ran for 125 yards. Tanner Catlin also crossed into the end zone for CR.

The Rockets rolled up 374 yards of total offense.

Castle Rock is now 3-5 overall, and 3-4 in the Trico League and will host Toledo for senior night this Friday.

La Center scored early and often before Toledo found its offense late to make things interesting during Trico League play. QB Gage McDill passed for 156 yards including touchdown passes to Kreed Askin, Dakota Robins and Conner Vermilyea. Taylor Hicks ran for 186 yards and scored the only rushing TD for Toledo in the 4th quarter. In all, Toledo rushed for 324 yards.

Toledo is now 3-5 in all and 3-4 in the Trico League and will travel to Castle Rock next week to battle the Rockets. To make our local game a little more interesting, both teams have identical records.

Onalaska scored seven touchdowns by the middle of the second quarter. It was then that Winlock was able to turn Loggers away for the rest of the game in 2B Central play.

Winlock’s Chance Fisher ran the ball for 99 yards, but the Cardinals were held to a mere 154 yards of total offense.

Winlock is 0-8 this season and will travel to play highly ranked Napavine on Friday.

United has one game left and it is absolutely positively a must win situation. First they have to root for Castle Rock to beat Seton Catholic on Tuesday and then knock off CR themselves in order to grab a playoff game. Seton Catholic must win both of their remaining games to earn a spot.

T/W lost a little momentum on Tuesday with a 1-0 loss to King’s Way Christian, but they righted the ship with a 1-0 victory Thursday over Seton Catholic. Stephanie Yoder scored the game’s only goal.

Toledo/Winlock is now 7-8 on the season will face Castle Rock on senior night Thursday evening.

Behind Wallace, other T/W finishers included Ashton Fraser in 12th, Wesley Kuzminsky in 17th, Jackson Kuzminsky in 18th and Jared Pohll in 23rd place to round out the scoring.

Castle Rock’s Jake Kimball was the lead runner for CR in 15th place.

Both Castle Rock and Toledo/Winlock will compete at the District IV Championships at the Lewis River Golf Course in Woodland on Saturday, November 2nd.

In a season where wins are hard to come by, two in a row make it all that much sweeter. On Tuesday, the Rocket netters got by Toledo 14-25, 18-25, 25-23, 25-18, 15-6. It was a masterful comeback as the Lady Indians had CR down two quick games before the Rockets came back with three straight games.

Castle Rock will take on undefeated Kalama at home on Tuesday. Toledo will host Ilwaco on Tuesday evening.