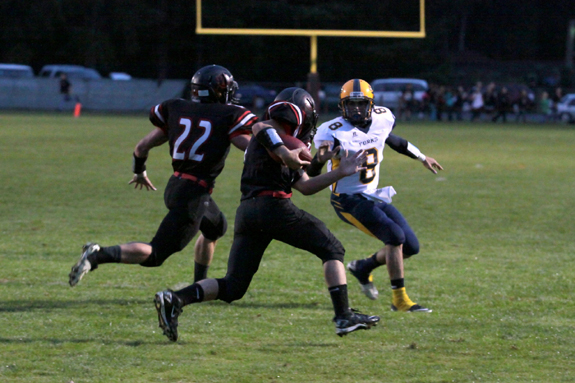 Toledo's Logan Holbrook returns and interception early in the game against Forks. Taylor Hicks (#22) is out front ready to throw a block.

Chase Lam ran for 88 yards as the Rockets earned their second Trico League victory on Friday night on the road.

Lam took over for Nate Willimason at running back but not before Williams gathered in a 58 yard scoring pass from QB Mason Klingberg. Williamson rushed 63 yards before he left the game just before halftime with a sprained knee, Talib Meeks scored a safety in the 4th quarter before Lam found the end zone offensively.

Castle Rock is now 2-1 and will host La Center on Friday evening.

Mistakes. Almost all of them on the offensive side of the ball helped Forks shut out Toledo in a non-league 1A battle. Gage Madill tried to pass the ball, something that has not been done on a regular basis for many years and totaled 48 yards with passes caught by Connor Vermilyea and Konner Crawford. The usual vaunted Toledo running game was held to just 57 yards by a stubborn Spartan defense.

Toledo is now 1-2 (1-1 in the Trico League) and will travel to Ilwaco on Friday evening.

Winlock's defense kept Raymond scoreless for a quarter, but the Seagulls found their feet and poured it on in the second quarter in a non-league 2B match-up. Raymond allowed the Cardinals a net of just 13 yards rushing. Chance Fisher led the Cardinals with 24 yards on the ground.

Winlock is now 0-3 after playing the 10th ranked Seagulls and will travel to Mossyrock on Friday.

The Lady Rockets got on the winning track in volleyball with two victories this week. One Tuesday, they defeated Castle Rock 25-22, 25-13, 25-22. Nicole Seidl had 14 kills and nine assists. Sarah Gaze had five kills to help the Rockets in the victory.

He may be a new coach, but he certainly is not new to local soccer. Brian Ziese, a Winlock resident is now the head girls coach at Castle Rock. Ziese is also the head coach of the very successful boys program at Rochester High School and was named Coach of the Year in the 1A Evergreen Conference last spring.

Ziese is a bit of a local pioneer in soccer as he was the first coach of the Rock-On soccer program, which was a combined girls team from Napavine, Onalaska and Mossyrock. He also coached Toledo/Winlock United for a couple of years.

He is proud of the speedy cast that he has at Castle Rock.

‘They are starting to do the things I want them to do," he said after a 9-0 victory over Stevenson on Tuesday. "We want to take the ball into the corners and not attack right down the middle. Most teams have a good sweeper in the middle and won’t allow good shots without spreading them out."

Mikayla Risner, Ellie Gallow, Mali Skreen, Hailey Johnston and Syvana Bone all scored for Castle Rock. Risner is usually a defender managed to be a particular offensive threat against Stevenson.

"She is pretty fast so nobody can burn us," said the coach. "Our defense is really good. They talk and I am really satisfied with our goalie (Megan Millward, a senior). One of the hardest things for us is scoring sometimes."

"Woodland is the team to beat," he added.

The Lady Beavers defeated both Toledo/Winlock United and the Lady Rockets this week and remain undefeated.

Castle Rock who is now 2-2 on the season will host White Salmon on Tuesday.