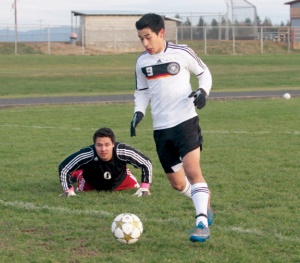 Freshman Adair Garibay (foreground) dribbles the ball past the Castle Rock goalkeeper (background) as Garibay scored the third of five goals on Thursday night in an 8-2 rout over the Rockets.

On Tuesday, United defeated La Center for the first time in five years with a 2-0 shut-out, and then Thursday United thumped Castle Rock 8-2.

"A lot of guys don’t play much and it takes me about a month to get the guys organized and the system going and for the guys that don’t play to get their touch back," said United Head Coach Horst Malunat.

Both wins were illuminating to a team that is dominated by the play of several freshman, but the upper classmen had to enjoy the defeat of long-time nemesis La Center. Zack Debo scored after a goal-less first half with an assist from Fernando Munoz. Alexis Sanchez took a pass from Lakota Rakoz and extended the lead to the winning margin. The play of Goalkeeper John Buck didn’t go unnoticed, either.

"He has gotten better from last year, but when you give up goals and you make mistakes, it is really easy to get down," explained Malunat of Buck’s progress. "In this game, he really didn’t make a lot of mistakes, or the ones that he did were not costly."

"We have reorganized the defense and they have gotten better and that helps John because shots are more predictable when the guys are defending better," continued Malunat "It is good to know where a shot is coming from rather than, ‘Whoa, where did that come from?’"

United is now 3-4 overall, 3-2 in league play and will travel to Stevenson April 9.

Lady Warhawks Challenge Opposing Pitching
The Toledo/Winlock Lady Warhawks continued their up-and-down season with two losses to Woodland and a non- league loss to Rochester on Friday. Their record is now 2-5 on the season and 2-2 in league play.

"I would say that our team’s strength this year is the ability to put the ball in play while hitting," said new Head Coach Ryan Arnold. "Our lineup does not have any ‘dead spots’ that lead to automatic outs. We can count on each and every player in our starting lineup to be able to get it done when up to bat."

The Lady Warhawks are off this week, but will return to action April 8 with another scheduled game against Rochester April 9, and then a double-header with La Center at home the following day.

Warhawks Go Two for Three in Baseball
The casual observer of Toledo/Winlock baseball can usually tell when Mack Gaul pitches. The opponent’s score usually results in a zero.

Such was the case in two out of three games last week. In the first game of a doubleheader, Woodland got the best of the Warhawks with a 5-4 win, but Gaul pitched game two and allowed one hit over five innings while striking out eight as the Warhawks cruised to a 13-0 victory.

Gaul, Enrique Hernandez, Jacob Givens and Chris Gove all went two for three at the plate and had two RBIs each.

Toledo/Winlock is 6-4 on the year and 4-2 on the season. They are scheduled to play a non-league game on Friday against Adna.

Castle Rock Wins Two
Kole Beckers was three for five with a double and five RBIs as Castle Rock cruised to a 23-0 victory over Ilwaco Tuesday. 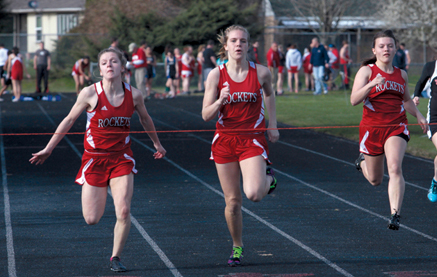 Mitchell, Moore(s) shine in Field and on the Track
Winlock sophomore Evan Mitchell won the javelin with a throw of 121’ 10" and then came back to claim first in the 800 meters for the Winlock Track team at a Central League Meet held at White Pass High School. For the second meet in a row, Chance Fisher had the best high jump among the four schools at the meet.

Castle Rock and Toledo competed in a Trico League Track meet hosted by Castle Rock on Thursday. The meet was generally dominated by Woodland and La Center, but Toledo’s Daniel Echtle took first in the 300 intermediate hurdles. Castle Rock’s Austin Moore won the high jump and 400 meters for the Rockets. Other results in the meet were sketchy for Castle Rock, but Laura Patrick, Elizabeth Moore and Mikayla Risner finished in a tight pack during the 100 meters. Elizabeth Moore won the 400 meters by nearly 30 meters.