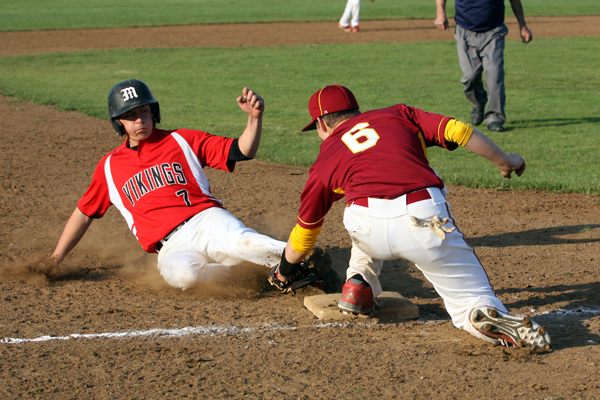 Winlock third baseman Chase Miller (right) tags out a Mossyrock runner who tried to advance a little too far. The Cardinals won their second game of the season with a 13-2 victory over the Vikings.

The United Soccer team earned two more victories last week with a 5-1 win over King's Way Christian and a 7-1 triumph over Seton Catholic. United hosts advisory White Salmon this week but had already won the league title after going nine games without a defeat.

The Castle Rock Softball team is on quite a tear. The Lady Rockets have won nine games in a row and are currently tied for first place in the Trico League. On April 27, CR thumped Stevenson 7-2 with Emily Ashby striking out four on her way to the pitching victory. Castle Rock is 6-0 in the Trico League and 11-2 overall.

The Rocket baseball team started last week in good shape with a 13-2 victory over Stevenson but dropped two games to King's Way Christian to drop into second place in the Trico League with a 9-2 league record. Against Stevenson, Shawn Godinho went 3-3 while Mason Klingberg was 3-4 in batting.

The Cardinals captured the second game of a doubleheader with Mossyrock by a score of 13-2. This is the second win for a young Cardinals team that has really improved according to program insiders.

The Toledo Baseball team split and important doubleheader with Napavine April 29. The Indians lost the first game 9-4 but then came back for a 5-1 victory in the nightcap. Toledo is currently in second place in the tough 2B Central League with a 13-3 record and 14-4 on the season.

The Winlock Fastpitch team has struggled at times to even field a team, but on Wednesday, they were able to sweep a doubleheader with Mossyrock 10-9 and 20-10.

The girls tennis team swept Northwest Christian on Thursday and took three matches from Eatonville on Wednesday. All of the CR singles players that include Mikayla LaFontaine, Haley Keeling and Barbara Millward were undefeated this week. The Rocket tennis team is 4-2 in league and 6-2 overall.