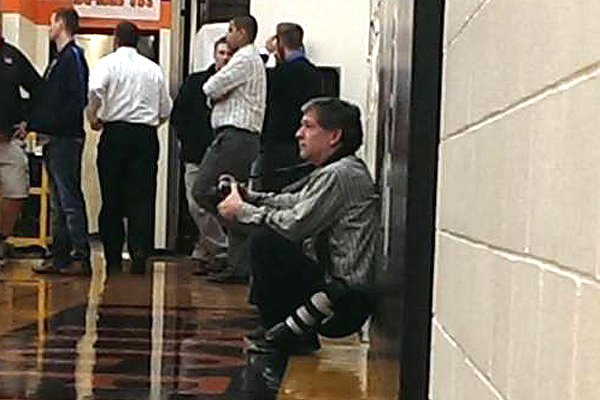 I've always loved newspapers. As a kid I read them and loved the stat boxes of baseball and basketball. It turned me into a type of statistical geek that intrigued me about the more cerebral side of sports. In the process, I dabbled in journalism from a school newspaper, yearbook and then later as a contributor for the Three Rivers Review in Klamath County, Ore. There has been some form of camera in my life since I was 15.

In 2006, while I was still working in environmental education for the U.S. Forest Service at Mount St. Helens, I approached then Town Crier Editor David Kellem about writing a regular column describing great outdoor activities within two hours of Winlock. "The Out and About" column allowed me to get to know great outdoor and often hiking activities in Western Washington while writing and producing photo essays about the experience. For me, it became an objective personal exploration of the region through the curious eyes of anyone that read the column.

Sometime in 2008, I ran out of ideas so Kellem offered me the opportunity to cover sports for the Town Crier. Little did he know that he woke up and old slumbering monster. I familiarized myself with each and every team within our coverage area. At one time I covered six schools and as many as 22 sports teams in any given season.

Some of the most memorable teams included the 2009 Napavine Football team that captured a state championship and a special group of female athletes at Castle Rock that dominated three sports a year for nearly three years. One of my favorite experiences included following the Toledo football program for a season that ended in the quarter-finals on a foggy field in Sumner. I was invited to produce a full color book chronicling the season using much of what I wrote for the Town Crier.

Another special memory included a trip to Northern California with the 2008-09 Winlock basketball team for a holiday tournament. That included several kids that had never been out of the northwest. That team went on to capture 5th at the WIAA State Tournament. Another Winlock basketball team nearly shocked the world in 2012-13 nearly overshadowing the team from Toledo that captured the state championship in Yakima that same year.

Onalaska provided some great fastpitch experiences and ultimately, I followed them (and a Castle Rock team) to Spokane for a state tournament appearance. Onalaska was also responsible for introducing me to one of the great basketball coaches in Dennis Bower, but watching the pure genius of Toledo Head Basketball Coach Scott Merzoian as he matched wits with Kalama's Coach Jody Stemkoski and ultimately 5th place in the WIAA state playoffs was one of the most subtle stories that my camera couldn't do justice. That became one of his final games as coach at Toledo.

My association with Town Crier ultimately led to projects with the Daily News and The Chronicle. In 2010, photos I took of a Napavine football loss to South Bend led to a photography assignment for sister publication Willapa Harbor Herald to cover the South Bend football team's run to a state championship. Most importantly, this experience gave birth to my photography company, which found a niche market throughout the northwest and will go with me upon my departure from Winlock.

Never has this been a full time or even a half time position. One thing has always been true. While I was required to be at one or possibly two games a week, I would typically venture to four or five games out of sheer enjoyment for sport, the joy of competition and watching our kids grow and flourish as young athletes and people.

With this I say thank you to a community of athletes, coaches, fans and readers that allowed me such a muse for close to a decade.