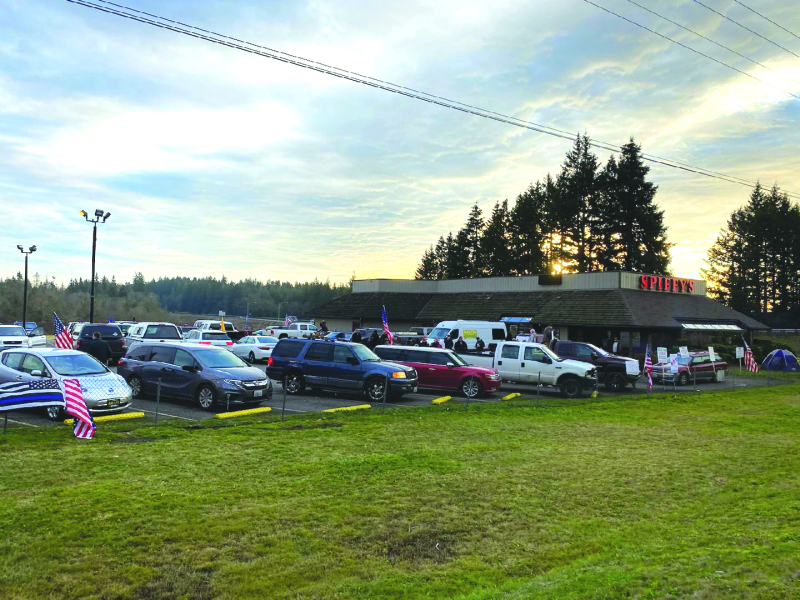 Photo by Lynnette Hoffman - A crowd of people arrived to support Spiffy's restaurant.

Governor Inslee's new shutdown order for restaurants and businesses has caused quite a stir in Lewis County. Many Lewis County restaurants are now defying his order, opening their doors to inside dining.

On Wednesday afternoon, Labor and Industries showed up at Spiffy's Restaurant. They informed the manager Rob, they had two hours to close down. It is said that a customer in the restaurant informed Labor and Industry that they were to "get the $#%& out." At which time they did leave. What Labor and Industries did not expect was that District 19 newly elected legislator Joel McEntire would be in the dining room eating.

McEntire followed the Labor and Industry employee's outside, asking who they were. It was not until he identified himself as a legislator that they informed him they left their business card inside. This is where it gets interesting. He was then informed by the L and I employees that they had taken a picture of his government license plate and they would be turning him in. Our state representatives do not have government license plates.

Representative McEntire stated, "What we are witnessing at Spiffy's is just the beginning of a movement. The citizens of Washington State have seen the destruction that has come to small businesses under the ineffective efforts of our Governor to flatten the curve. Spiffy's will not be the last business to stand up for itself and good citizens everywhere should let these businesses know that we stand with them."

Representative Jim Walsh was also at Spiffy's, he spoke with the manager and informed him they could not shut him down, but they could fine the restaurant. Representative Walsh stated, "The story of Spiffy's is bigger than one restaurant staying open. It's bigger than one business defending it's right to exist. The story of Spiffy's is that people of southwest Washington have found their voice. They won't tolerate bureaucratic bullying. And the rest of Washington is seeing this."

Sheriff Snaza stated this about writing the letter, "The purpose of the letter by PA Meyer and myself is to address the more global issue of what the governor's restrictions are really doing to our communities. All though I understand the seriousness of the virus people need to work and provide for their families, we cannot merely depend on the government to take care of us."

In the letter, it basically states that the Lewis County Sheriff's office does not have the resources to enforce Governors Insee's edicts. If Governor Inslee would like to serve the notice on Spiffy's restaurant, they will not have the support of Lewis County.

As of the time of this writing Labor and Industries has not returned. The restaurant remains open, following the previous guidelines for cleaning and social distancing tables. Many people from all over the state have been at Spiffy's this week, from the Seattle area to Portland and many citizens' rights groups as well.