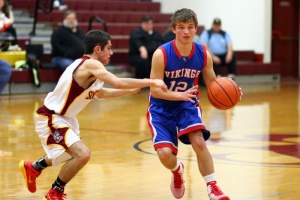 At Wishkah Valley High School last week the girls began their season against the Lake Quinault Lady Elks. The game remained fairly close until the final minutes when South Bend pulled away. The final score of the game was 54-48.

Coach Gary Wilson had this to say, "After the first quarter we got our game legs on and just needed to improve on effort...and we did. Definitely our post play is the biggest part of our game right now, getting the ball to the posts so they can do something with it is going to be big.

"Defensively we are going to have to anticipate a little bit more, that is something that is typical early in the season. We have to anticipate where that pass is going to go. We moved into a defense that we haven't practiced that much to combat their big post and we had to customize the defense a little bit. We will run probably three main defenses once we get them tuned in a bit.

"Emily Sanchez does the bulk of the work up top as point guard and the work underneath are the posts Rielly Myers and Edith Razo. Primarily we ran post entry offenses, we have three of four that we use and they worked real well. We were 23 out of 39 at the line and we obviously put them in foul trouble. We like to get 60 to 70 percent from the line. We put 54 total points on the board and that's good. The final score was 54 to 48. I was happy with the way that we did pickup our intensity and the effort did get a lot better. We ran structured basketball where we did the right things and down the stretch we ended up winning the game by doing the right things. They are a great, hard working bunch of kids and that makes it real enjoyable."

Leading the Tribe in scoring was Edith Razo with 20, following was Emily Sanchez - 18, Rielly Myers - 10, Emma Lorton - 4 and Tammi Kousonhsavath - 2.

In their second game last week South Bend met the Willapa Valley Vikings at Valley. The game was fast paced and hard fought with Valley pulling down the win, 51-32.

Coach Rangel had this to say, "Considering this was the first game, I saw a lot of resiliency in these kids with us going into the fourth quarter at five down and coming out with the victory."

Rangel continued, "Throughout the game I saw some good things...we were able to attack the basket. We could have rebounded better but it is the first game and we have some room for growth. I think that the kids tried hard and they competed. Tyson Johnson played a really good game. They all contributed and certain players got hot. A.J. Sanchez caused a lot of error to passes and forced deflections and he had nine steals. It was nice to see we had Miles Davis taking two power dribbles to hit Austin Lewis in transition for a layup and Juan Bucio with a reverse layup. On the boards we had Mitch Edwards with 12, Tyson with 6, Miles with 6 and Austin had 9. We try to run an up tempo simple motion offense, baseline cutters and that sort of thing."