Lewis County’s new Mobile Command Unit (MCU) is ready to respond at a moment’s notice to wider a variety of emergency needs in the local area.

Acquired at no charge through a federal surplus program, Chief Criminal Deputy Gene Sieber said the 40-foot 1995 Freightliner truck will be replacing a 29-foot fifth-wheel trailer as the county’s primary MCU.

“If it’s going to be a big event where we’re going to have the SWAT team or detectives there…this thing will roll,” said Sieber, stating flood events, search and rescue and other disasters will see this new unit parked on the front lines.

When fully-equipped, Seiber said the MCU can be deployed in as much time as it takes to warm up the engine and, once in the field, will be a center for everything from staff meetings and communications to evidence analysis and suspect interviews.

In a statement released Thursday, Lewis County Sheriff Steve Mansfield described the new MCU as the fulfillment of a “critical need” and the result of active searches for the right vehicle.

“Our staff did an outstanding job in procuring, retrofitting, and converting this truck into an extremely functional mobile command and response vehicle,” said Mansfield. 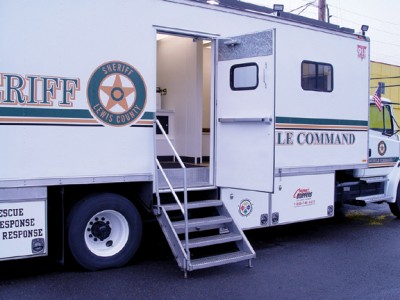 The MCU was originally a mobile dentist office for the US Navy and was acquired by Lewis County in early October after the vehicle was decommissioned. Though it is 18 years old, the truck only has 7,500 miles and Sieber said he expects it will serve his agency for at least two or three decades. 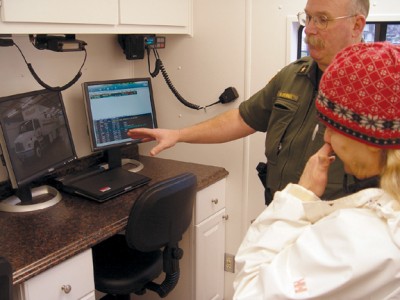 Sieber (background) details the features of the communications room to Town Crier reporter Marlea Hanson (foreground), who was one of many guests to tour the MCU during the an open house in Chehalis Tuesday. Sieber said the equipment and counter space throughout the vehicle, including an evidence lab and full bathroom, was installed by Sheriff’s Office staff and inmate labor at an expense of around $20,000. Sieber emphasized no Lewis County tax dollars were used to acquire or upgrade the truck, but rather funding from grants, donations and evidence seizures. 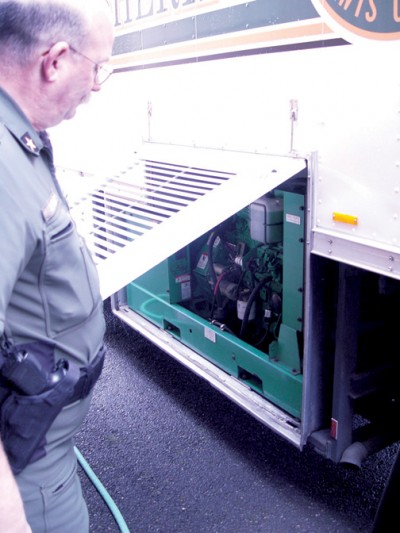 Sieber displays the MCU’s five-cylinder diesel generator, which operates independently of the trucks engine. The generator is responsible for powering radio, satellite and wifi connections for the equipment inside and can operate for more than 100 hours without the need to refuel.
Read more from:
TC - Police, Fire and EMS
Tags:
None
Share: