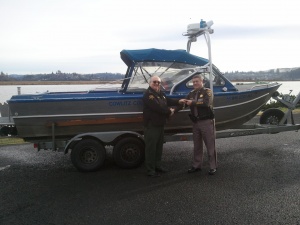 “We are one only three counties in the state without a formal marine program,” Sheriff Scott Johnson told the Herald. “We’re working towards doing that, which would enable us to get state funds.

“We get calls from the coast guard all the time to assist,” Johnson said.

“The addition of this vessel will obviously aid us with responding to incidents or emergencies only accessible by boat,” Johnson added. “We are truly appreciative of the generosity displayed by Cowlitz County and Sheriff Mark Nelson”.

The boat is currently at the county shop for storage. The boat was previously utilized by the Cowlitz County Sheriff’s Office as a multi-purpose patrol boat.

The 1996 boat is equipped with a radio, GPS, spotlight and even came with a full tank of fuel. “We really did well on this,” Johnson said. “It was given to us for free from Sheriff Mark Nelson.”

Two people in the sheriff’s office have already passed the state approved class to drive the boat, and more plan to do so in the near future. “It should be at no expense to the county,” Sheriff Johnson said.

Sheriff Johnson said that the sheriff’s office has been recovering a lot of stolen property involved with the recent rash of burglaries in the county.

“We’ve recovered a person’s $30,000 artificial leg, a chainsaw, a firearm (pistol),” Johnson noted. “We have some items that we don’t know where to assign to.” Johnson said the person that stole a quad mounted a stolen radar detector on it.

“Deputy Vance has really worked hard on this case as have Deputies (Ryan) Tully and (Ron) Davis,” Johnson said.

Local law enforcement has been busy putting people behind bars.

“We’ve been way up on inmates unlike the previous administration that capped it at 20,” Johnson said.

The Sheriff’s Office arrested Michael Donavin James Heslen, 18, last Thursday in the Long Beach area for taking a motor vehicle without permission in the second degree, theft in the third degree and two warrants for failure to comply. Heslen’s bail was set at $14,000.

The arrest occurred when Heslen was in the midst of stealing a flashlight valued at $150 from a store. Heslen was spotted taking the flashlight by an employee. Heslen left the store and jumped into a van that he had allegedly already stolen. An undercover drug detective in the sheriff’s office was nearby when the vehicle came out in front of him and he called for backup. Undersheriff Todd Fosse arrived on the scene along with the Long Beach Police Dept. and he was “quickly apprehended” according to Fosse.

Another recent arrest by the Sheriff’s Office ended up putting Kurt Edward Kaino, 50, behind bars with a $250,000 bail for malicious harassment and intimidating a public servant. Kaino was arrested for slashing tires on Long Beach police cars. Kaino pleaded innocent in Superior Court (Jan. 18) to 11 felony charges of aggravated malicious mischief and three counts of tampering with a witness.

If convicted, Kaino is expected to face an exceptional sentence, which could net him five years in prison.

Ronald Eugene Jongeward, 37, was arrested by Raymond Police for failing to register as a sex offender. Jongeward’s bail was set at $50,000. He was also arrested for a community custody violation and two outstanding warrants for failure to appear.

The State Patrol arrested Miguel Agustin Silva Quintana, 22, for possession of methamphetamine and driving with a suspended license in the third degree. Silva Quintana was ordered held for immigration officials. He was arrested by Patrolman Townsend and his bail was set at $10,000.

Andrew Kayne Windrow, 37, was arrested last Friday for two counts of domestic violence in the fourth degree and another parole violation with his bail set at $17,500. Sheriff Deputy Darree Smith arrested him.

Sheriff Johnson said that community meetings are in the works for the month of March at Willapa Valley High School and Tokeland.