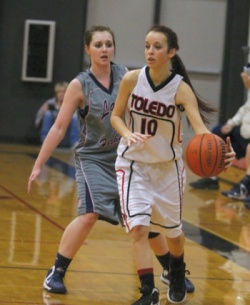 Toledo Senior Kaelyn Whipp brings the ball up the floor against Ilwaco during a home game the night of Jan. 22.

It would just be a sports season in Toledo without Kaelyn Whipp involved, but the community is going to have to get used to that concept soon. Whipp will be finishing up her final basketball games next month and then prepare for one final fastpitch season.

After graduation, Whipp plans to say goodbye to Washington for her college years.

“I plan to go to university in California,” she said. “I haven't made my decision on which one yet though. “I plan to major in kinesiology in college and become a physical therapist.

“I've got the chance to play fastpitch at one of the colleges of my choice, but I haven't decided if I actually want to do that. I'm pretty focused on the one-way track through academics.”

Academically, she is more than sound and it should be no surprise that she has a special place for physics.

“It fascinates me finding the true meaning behind the occurrences that happen in this crazy world,” she said.

Perhaps it is the physics, but she confides that fastpitch (softball) is her best and favorite sport, despite playing both soccer and basketball for nine-plus years.

“My favorite memory from sports is fastpitch (during) my junior year,” she said. “The season in general was just always amazing and fun times regardless of the outcome.”

There must be a bit of irony in fastpitch too when Whipp talks about going to Pasco (one of the driest locations in the state) before her ninth-grade year and having to deal with too much rain.

“I had heard how great and hot it always was down there, but when we went, games were rained out and we had to cram practically the whole tournament in one-and-a-half days,” she said. “It was a great experience and the fields were flawless. Definitely a change from Lewis County fields.”

Right now she is thinking about having played 10 years of basketball. Currently, the Lady Indians are in contention for a district playoff spot but will have to play well down the stretch. Whipp serves in the frontcourt as part of a committee that handles the ball for Toledo.

She feels she has had a lot of support through a decade of hoops.

“People that have helped me in basketball are all my coaches, and previous players," she said. “My biggest supporters are my parents, my friends, and my teammates."

She also says that the Toledo basketball fans are the best anywhere.

Of course, the girls have taken that love on the road in the off-season. Competitors at various camps often feel familiar with each other and the Toledo girls allowed that to spill off the court once.

“We sabotaged another team's vans,” she grinned. “All just harmless fun of course.”

After one more fastpitch season, the focus will become even more academic as she prepares for college life with sports being little or no part of it. 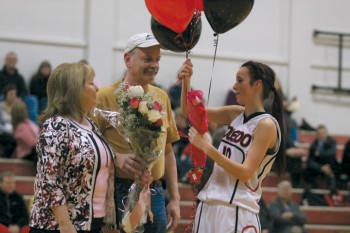