Selmer's building facades may remain as part of Gateway Center 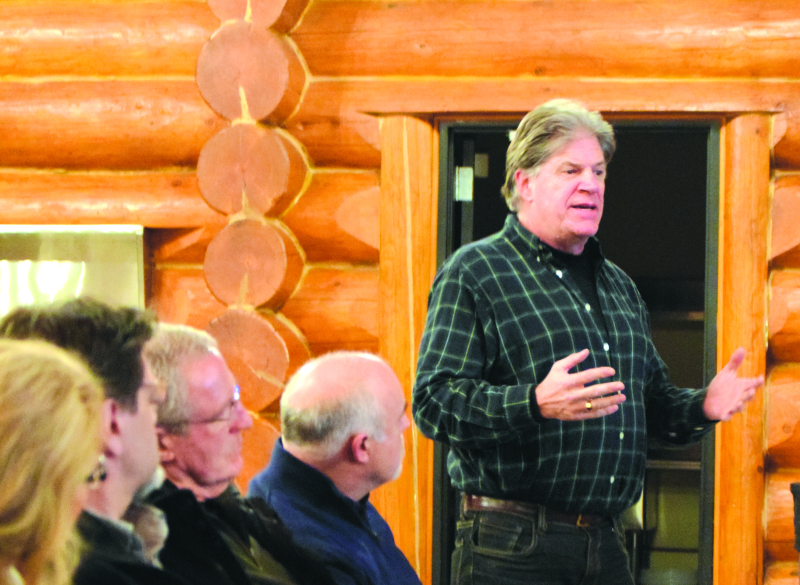 Photo by Todd Bennington - Gateway Center designers heard comments on Jan. 5 from a number of area residents in regard to the fate of the Selmer's building. Most spoke in favor of maintaining a portion of the existing building.

At a special meeting held on Jan. 5 at the Rotary Log Pavilion to determine the fate of downtown Aberdeen's Selmer's building in relation to the construction of the new Gateway Center, city officials and project designers agreed that design options will be made available that incorporate two of the building's existing brick facades.

The meeting was scheduled in response to the circulation of an online petition and public concern over the more than 90-year-old building, which sits on the site of the yet-to-be-constructed Gateway Center, a planned economic development, business, and tourism hub.

Project officials estimated the cost of keeping the existing facades and incorporating them into the new Gateway structure to be about $850,000, while total demolition would range around $300,000 - meaning an additional $550,000 will likely be tacked on to the total cost of the Gateway project.

"I want to underscore that again by saying this is just the construction budget," explained lead project architect Matthew Coates. "It doesn't include any of the soft costs, which would be the permitting fees, the architect's fees, engineering fees of any kind. This is just construction costs. I imagine by the time it's all added in and done it would be close to $1 million. That's about as close to reality as we can get for now."

Earlier estimates that proposed to save the entire Selmer's building ranged in the neighborhood of between $1 million to $2 million.

Aberdeen Mayor Erik Larson told those in attendance that he finds the more recent estimate for maintaining the existing facades to be more doable from a financial standpoint.

"This is quite spectacular really," Larson stated, "compared to where we thought we were going to come in at. I was quite surprised at how low this was."

"I feel," Larson continued, "that it's probably appropriate with this new information to look at taking the existing concepts we have from the original portion of the project, [which] utilize the Selmer's building, and spend a little bit of extra money to bring those up to the same level of detail and provide those both at the next meeting to compare and contrast and get some public comment. It's really not that much additive to the cost of the project ... We're still looking at an increased cost. I won't say it's insignificant. It's definitely not as bad as we thought it might be."

Larson opened the floor for public comment, and most who spoke were in favor of preserving some aspect of the existing building.

"I think we need to look at the mistake the City of Hoquiam made when they tore down a bunch of really good old buildings," said one local resident.

Another woman, who described herself as having moved to the area from Ballard, stated that city's experience replacing old buildings with modern ones should serve as a warning to Aberdeen.

"We have no community anymore," she said of Ballard. "We're generic. We're just like any part of Seattle ... Keep your history."

Only a couple of attendees expressed opposition or ambivalence about maintaining portions of the existing Selmer's building. One man noted that tearing down some old structures had been integral to the renewal of cities like Seattle and New York and observed that even locally the Selmer's building is not the most iconic of old buildings. He said his preference was for something new.

For his part, Larson said that while he conceives of his role as mayor as seeing that the will of the public is done, he believes there's merits to both positions and a balance ought to be struck.

"There is an aspect of we should preserve the old, but we need to have opportunities for new. There needs to be some opportunity for the next generation to make their mark, so I think there's a balance here that's very difficult to find, because there's so much passion about this issue," Larson stated.

Questioned on costs, Larson said that private funding for the Gateway Center has not yet been secured but that at some point there will need to be more than just state money for the project. Project proponents have touted that they won't attempt to raise local taxes in order to fund the Gateway Center.

"We're working on who that could possibly be and who we could reach out to," Larson said of potential private funding sources. "I don't think there's a lot of capacity in the county or in any of the cities to really provide the kind of meaningful funding to this project and not have it be an economic drain rather than economic benefit."

In response to a question on how much has been spent so far on the Gateway Center project, Larson noted $1 million had been allocated by the state for property acquisition, $50,000 had been provided by the county for a feasibility study and planning, and $550,000 had come from the state during the last budget cycle for demolition, parking lot construction, and other work. The City of Aberdeen has also contributed labor and staff time, he indicated.

Larson wondered aloud if there is enough community support to save the Selmer's facade if all but the $550,000 cost difference were to be funded by outside sources and the city had to come up with the money itself. He noted there are other old buildings in the area people are working to preserve as well, and questioned if the community is really willing to prioritize the Selmer's building above other concerns if other sources were to decline to fund the additional cost.
Larson also expressed surprise that more public outcry hasn't been heard in regard to the old Pioneer Paper building, with which he said the city is currently negotiating with the county as to which entity will be responsible for teardown and remediation work.

In response to questions and statements from those who voiced opinions on the matter, lead architect Matthew Coates clarified that the discussion on the Selmer's building has centered around the facades because the structure of the building itself is of poor quality and condition.

In terms of preserving aspects of the building, Coates expressed the opinion that retaining the historical facades, rather than trying to replicate them or attempting to save the entire building, is the best idea because of costs and the fact it allows for a degree of authenticity to be maintained.

A final public meeting on design concepts for the Gateway Center is scheduled for 5:30 p.m. this Thursday, Jan. 19, at the Rotary Log Pavilion.