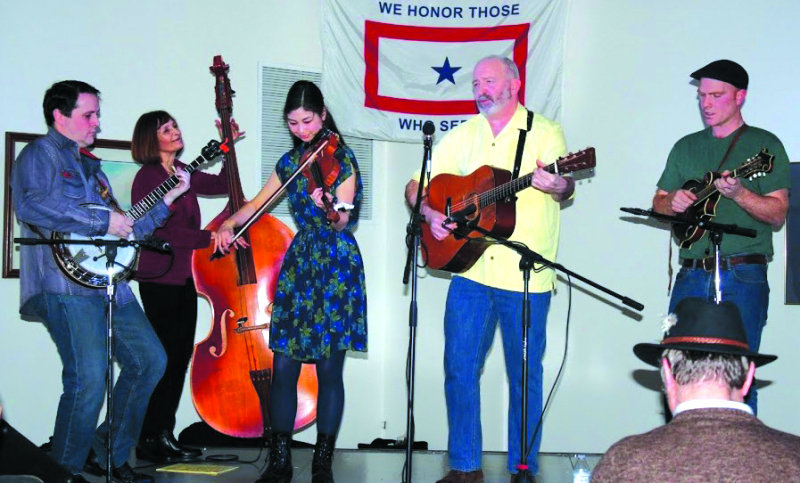 The show marked the first time the Washington Bluegrass Association has held a concert outside their annual three-day Mount St. Helens Bluegrass Festival at Toledo High School in the WBA's 33-year history. Association president General Cothren of Winlock says the event has proved so popular among attendees that another concert is in the works for as soon as April. "People have been telling me for three days how much they enjoyed the concert, including the band members themselves," said Cothren. "Everyone seemed to have a great time, so we're working on putting together another show. We had no idea how this would all go but things went pretty close to perfect."

WBA board member Jamie Guenther of Napavine, former operator of the Jackson Prairie Speedway auto racing track, was likewise enthused both by Saturday's response and the future for similar events. "We have a number of things we can improve on between now and the next concert," Guenther opined, "but I think this was a good starting point. We were well on the way towards a sellout shortly after the tickets were made available, and that's a credit to board members who sold them. We had a busload of more than 40 people come down from Thurston County and there were several others from outside the Twin Cities there, which tells me there's a demand for good live bluegrass music in southwest Washington."

Whiskey Deaf wowed audiences last summer in Toledo and they brought their A game on Saturday. "We're bringing them back this August," Cothren mentioned. "I've never done that with another act, but I kept hearing from folks how much they enjoyed Whiskey Deaf so inviting them back was easy. When we decided to try putting on a separate show, it wasn't hard to pick who would be our first choice of performers."

Much of the credit goes to Staninec, a California native now living in Portland. She won the 2015 Momentum Award from the prestigious International Bluegrass Music Association and has toured and recorded with some of the biggest names of the genre since she was 12. The winsome Staninec will be performing with Rod Stewart's band during the Rock & Roll Hall of Famer's run at Caesar's Palace in Las Vegas next month before he goes on tour later this spring. Before then, Whiskey Deaf will appear at a showcase February 26 at the Wintergrass Festival in Bellevue, the largest bluegrass event in the northwest.

For his part, Cothren is looking forward to the next WBA concert: "The museum and Chip Duncan were super to work with. We're working on who to bring in for our second show, but I think we may have found our second home."