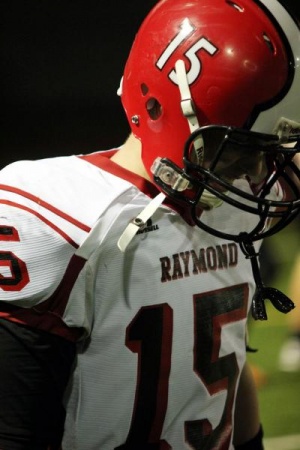 "They are ranked no.1 in the state for a reason," said Seagull Head Coach Luke Abbott.

Raymond held the Tigers in their first two possessions making them punt twice. Napavine held as well forcing the Seagulls to put out of their fourth and yardage situations. And the first eight minutes of play, the ball traded back and forth four times before Napavine found a hole and exploded the rest of the game.

The short run by Tiger Mac Fagerness started the ball rolling in favor of Napavive late in the first quarter.

Raymond went right back to work but as the first quarter timed into the second quarter, the Seagulls were at midfield and had to again punt possession over to the Tigers.

Sparking the Seagulls after having to give the ball up, junior Jayce Freeman came away with an interception to bring Raymond back on the offensive. Tandem running by Elliott Murdock and Jace Duckworth brought the Seagulls back to mid-field, but were unable to penetrate the Napavine defense any further.

The Tigers were able to accumulate a 26-0 lead by the half on a combination running and passing game.

"They are coached very well, and Josh (Coach Fay), has a great staff," noted Abbott.

The second half did not get any better for the Seagulls as on the opening kick off, Napavine kicking to Raymond, the ball was stripped away from Raymond on the kick return and Napavine took over.

The Tigers managed 52 unanswered points against the Seagulls into the fourth quarter, but Raymond did not give up and was able to break through the Napavine defense for a score. Sophomore Kason Koski got the call and run through the Tiger line for an 18-yard touch down run. Teammate and Seagull place-kicker Andres Martinez dropped one through the uprights as Raymond got on the board, with just over three-minutes left in the game.

For coach Abbot and the Seagull staff and team, they will have to see what next year will bring as the Seagulls have been in post season play for the last three years running.

"For my first season, I can not say enough about the kids on the team and my coaching staff. It will be hard to say goodbye to the seniors," said Abbott.